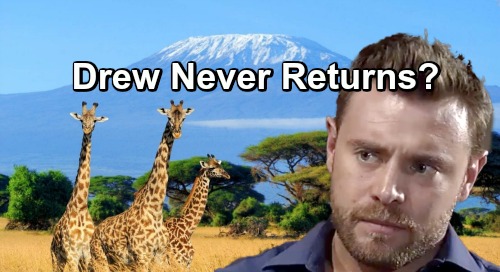 General Hospital’s Jasper Jacks (Ingo Rademacher) recently revealed that he had purchased half of Aurora Media from Drew which includes the print division. Jacks is highly capable of running the media company by himself, he is a corporate raider after all. Could this be the beginning of Jacks controlling the company? Is this a hint that Drew has no intention of returning to Port Charles?

General Hospital’s Jason Morgan (Steve Burton) and Drew were supposed to build a treehouse together as Oscar requested, but Drew tried to get Jason to start building it by himself.

Jason could have easily built the treehouse by himself but Monica Quartermaine (Leslie Charleston) reminded Drew that it was meant to be a joint project at Oscar’s request. Is this another hint that Drew is gone for good?

Drew Asked Sam To Make Sure Scout Knows Him

General Hospital’s Drew had a strange conversation with Sam McCall (Kelly Monaco) where he asked for Sam’s help to be a good father to Scout and told Sam he would always be afraid of losing Scout. Logically, losing one child doesn’t mean you will lose your other children but usually entices you to hold on tighter to the kids you have left.

Is it possible that Drew fears Scout forgetting him in his absence and that is why he needs Sam’s help? Is Drew distancing himself from Scout so he doesn’t smother her but hovering?

Could Drew Be Unable To Face Oscar’s Death?

Could Drew simply not know how to handle life without his son and need to leave all of the reminders in Port Charles to come to terms with Oscar’s death? Is it possible that Drew may decide never to return to all the memories that surround Port Charles? Come back to CDL for all your General Hospital spoilers, news and reports!