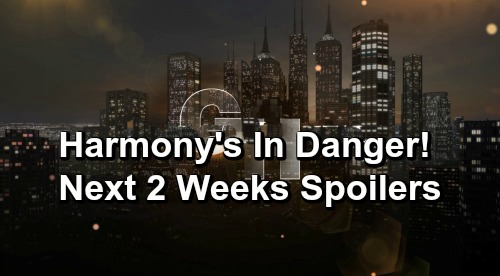 General Hospital (GH) spoilers for the next two weeks tease that some stunning moments are in store. During the week of June 3-7, Jordan Ashford (Briana Nicole Henry) will be knocking on death’s door. That’ll drive her loved ones to do some desperate things. Curtis Ashford (Donnell Turner) and Dr. Hamilton (Michael Easton) will consider murdering Ryan as part of a plan to secure his kidney.

However, a mystery man or woman will end up injecting Ryan with something first. He’ll have a seizure that leaves him terrified when he wakes up. Stella Henry (Vernee Watson) will use this as a chance to talk about mortality and the public’s perception of Ryan.

Does Ryan want to be just another murderer that everyone forgets about or do something that’ll be remembered? Ryan will choose the latter, so that’ll leave Jordan’s family and friends baffled. They’ll worry about Ryan’s motives, but they won’t complain since Jordan will get the lifesaving kidney she needs.

Elsewhere, Shiloh Archer (Coby Ryan McLaughlin) will get some great news. General Hospital spoilers also say Margaux Dawson (Elizabeth Hendrickson) will stand her ground. Will she refuse to charge Shiloh with anything, even if Sonny Corinthos (Maurice Benard) releases the pledge? Margaux might call Sonny’s bluff and hope he doesn’t take that far.

Other General Hospital spoilers say Carly Corinthos (Laura Wright) will face some anxiety. It’ll probably involve her pregnancy since that’s definitely a topic that’s on her mind lately. Carly just wants her baby to be healthy, but trouble could be brewing.

Next, Drew Cain (Billy Miller) and Dr. Kim Nero (Tamara Braun) will take some healing steps forward. They’ll try to move on after the painful loss of Oscar Nero Quartermaine (Garren Stitt). During the week of June 10-14, Kim will have to be tended to. Drew will step up to do that, so it’s possible Kim will get a minor injury during their Mt. Kilimanjaro trip.

Then again, Drew may be doing some emotional tending. He could be there for Kim after she has a grief setback. Over with Sonny, he’ll determine that it’s time to take action. Sonny may be ready to do away with Shiloh for good, but Kristina Corinthos-Davis will deliver a desperate plea. She hates Shiloh, but she still won’t condone murder.

Nevertheless, GH spoilers say Harmony Miller (Inga Cadranel) will land in danger. Could she be used as bait for Shiloh? Will she get caught up in peril another way? Regardless, Harmony will count on Shiloh to come riding in on his white worse and save the day.

Nelle Benson (Chloe Lanier) will also be up to her old tricks. She’ll plan to escape and avoid the rest of her prison sentence. Finally, Maxie Jones (Kirsten Storms) won’t want to plan anything with Peter August (Wes Ramsey).

Peter was hesitant to join her mission, so Maxie may view him as a hindrance once her plot to reunite Dante Falconeri (Dominic Zamprogna) and Lulu Falconeri (Emme Rylan) rev s up.

General Hospital fans won’t want to miss what’s in store! We’ll give you updates as other GH details emerge. Stay tuned to the ABC soap and don’t forget to check CDL often for the latest General Hospital spoilers, updates and news.