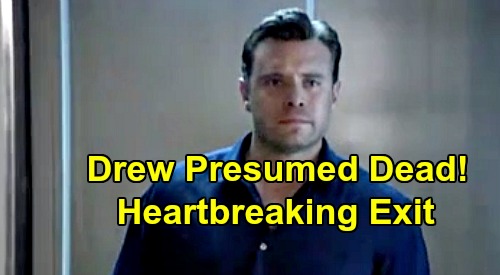 They can soon add one more to the list since Drew stopped the sale and secured the cash. If he’d just been a couple seconds later, Drew would’ve continued living a pleasant life in Port Charles. Unfortunately, that money will put Drew on a disastrous path. He told Franco Baldwin (Roger Howarth) he would fly to Afghanistan to return the money, but he won’t be making the trip home.

Of course, the real reason doesn’t involve a cursed car or even an unlucky break. General Hospital needed a quick and easy exit strategy for Billy Miller, so that’s why Drew is doomed. It looks like Drew will be presumed dead in a plane crash.

As the GH episode ended on August 21, Drew stepped into the elevator with a sense of finality. The camera lingered on Miller as the doors shut, indicating this was the end of the road. Drew won’t get any more scenes with his daughter, Scout Cain (Ella Ramacieri), which is a shame. However, that’s true to life. You can’t predict when your time will come, so sometimes you don’t get those final goodbyes.

Even so, it’s sad that General Hospital viewers won’t see any last Daddy-daughter moments, especially since they aged Scout a bit. Drew didn’t get an opportunity to interact with this older Scout much. Naturally, “Dream” fans were hoping for some sort of closure as well. Sam McCall (Kelly Monaco) is with Jason Morgan (Steve Burton) now, but Drew is the father of her child and still matters to her.

Alas, Drew is just…gone. It’s sure to be a shock once Drew’s plane goes down, which is what’s expected. Jason will have a tough conversation with Monica Quartermaine (Leslie Charleson) next week, so it seems he’ll break the terrible news.

Drew will likely be presumed dead and lost in the wreckage, but you never know what the future holds. Perhaps a return or recast will happen someday. General Hospital spoilers say Drew’s departure will bring some gripping drama, so stay tuned. We’ll give you updates as other GH details emerge. Stick with the ABC soap and don’t forget to check CDL often for the latest General Hospital spoilers, updates and news.