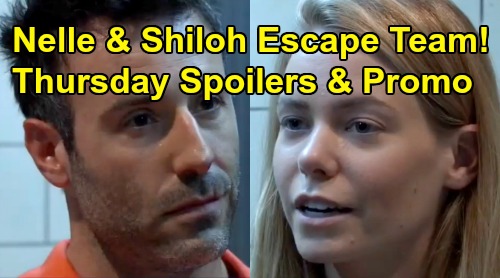 Of course, Drew’s not going to make it back home. This is Billy Miller’s exit strategy, so GH fans expect news of a tragic outcome soon enough. In the meantime, Franco Baldwin (Roger Howarth) will meet up with Ava Jerome (Maura West). He’ll think Ava can give him the real story about “this Franco,” a man he really knows nothing about.

Will Ava fill Franco in on his sinister history? If so, Franco may not feel close enough to the situation to battle guilt. Since he has Drew’s memories, Franco won’t feel the emotional weight of his horrific actions. He’s been unburdened thanks to this memory-mapping procedure, so Ava already suggested she thinks Franco should count himself lucky. She may suggest that to Franco himself on Thursday.

Other General Hospital spoilers say Peter August (Wes Ramsey) will return from his trip to Pentonville. Shiloh Archer (Coby Ryan McLaughlin) is resorting to blackmail, but Peter won’t want him to have that kind of power. Maxie Jones’ (Kirsten Storms) reaction is what he really cares about, so he’ll decide to come clean and hope another dark piece of his past won’t be a deal-breaker.

Peter will tell Maxie there’s something she needs to know, but he’ll have to hold that thought. Maxie will face an unexpected interruption, which will give Peter a chance to shift strategies. He’ll opt to keep quiet, which could spell big trouble for “Paxie” soon enough.

Over with Lulu Falconeri (Emme Rylan) and Dustin Phillips (Mark Lawson), they’ll realize they’ve been set up by Maxie. Lulu’s divorce from Dante Falconeri (Dominic Zamprogna) was just finalized, so she certainly doesn’t need to jump right into another serious relationship. What Lulu does need, however, is a break from all the drama.

Maxie knows it’d be good for Lulu to have some fun, so she arranged for Dustin to be her driver. When they realize Maxie did a little scheming, Dustin will tell Lulu he’s sorry before changing his mind. He’ll eventually decide he’s not sorry at all since he gets to spend some time with Lulu. These two enjoy each other’s company and that’ll be the case on Thursday as well – despite Lulu’s blue mood over her divorce.

Next, Hamilton Finn (Michael Easton) will insist he’s glad someone came home. Anna Devane’s (Finola Hughes) official return airdate hasn’t been released yet, but this doesn’t seem to be her. Finn may just be admitting that he likes having Hayden Barnes (Rebecca Budig) back in town. Despite some initial tension, they’re growing closer again and that can only lead to “Fanna” issues.

Meanwhile, Kim Nero (Tamara Braun) will clearly be in freak-out mode over Franco. She’ll try to hide it, but Julian Jerome (William deVry) will know something’s up when Kim suggests they could leave for Manhattan tonight. Julian will push Kim to open up about what she’s dealing with instead, so expect an emotional conversation.

Finally, General Hospital spoilers say Shiloh Archer (Coby Ryan McLaughlin) will cross paths with Nelle Benson (Chloe Lanier) in prison. Nelle will insist it looks like it’s just the two of them. She may not realize Shiloh is the same guy who’s been trying to take “Wiley Cooper-Jones” from Brad Cooper (Parry Shen) and Lucas Jones (Ryan Carnes), but that revelation should come sooner or later.

For now, Nelle may view Shiloh has a beneficial ally. Will Nelle get in on the escape Shiloh’s cooking up? We’ll give you updates as other GH details emerge. Stay tuned to the ABC soap and don’t forget to check CDL often for the latest General Hospital spoilers, updates and news.