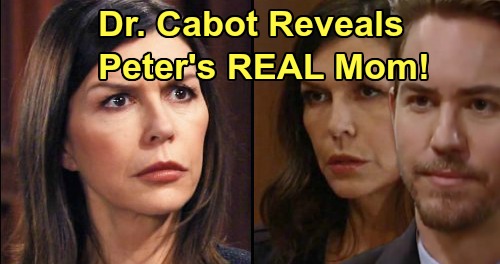 However, there may be a way out for Dr. Cabot. Robert Scorpio (Tristan Rogers) recently mentioned that Cabot wants to cut a deal. The doc’s looking for a trade here: his freedom in exchange for answers. Anna Devane (Finola Hughes) doesn’t know which memories of hers came from Alex Devane (Finola Hughes). If Dr. Cabot is allowed to walk free, he’ll reveal the memories that were implanted.

Of course, GH wouldn’t mention this potential deal if it wasn’t important. There’s no guarantee Dr. Cabot will be let off the hook completely, but the charges might be reduced. General Hospital has been playing up Robert’s distrust of Peter even more lately, which makes sense considering there’s a Peter and Helena Cassadine (Constance Towers) connection.

Peter hasn’t been completely forthcoming during his time in Port Charles. He was apparently in far deeper with Helena and the memory-mapping mayhem, so he’ll work hard to cover that up. Once Maxie Jones (Kirsten Storms) finds out, she’s bound to get hurt – just like Robert predicted. This could also be the push Robert needs to figure out what’s what for Anna’s sake. Is Peter Anna’s son or not?

Most General Hospital fans weren’t thrilled about Anna willingly sleeping with with Cesar Faison (Anders Hove) and getting pregnant as a result. The idea of Peter being Anna’s long-lost child was never a very popular one. This Alex angle would be an easy fix and could set up another story. If Peter loses Maxie and realizes his real mom is a master manipulator like his father, could be revert to his dark tendencies?

This would be an opportunity to take Peter down a villainous road again, which would be great since Ramsey’s excellent at playing a bad guy. On the other hand, GH writers could change their minds and do the unexpected. Perhaps making Peter Anna’s son after all could be what saves him and keeps him focused on a better path. Peter may need Anna more than ever after Shiloh causes more chaos.

Regardless, General Hospital spoilers say Dr. Cabot could reveal what’s what if he scores the deal he’s seeking. Is Peter actually Alex’s son or will there be twist that leaves things as they are? It should be interesting to see where this hot plot heads next! We’ll give you updates as other GH news comes in. Stick with the ABC soap and don’t forget to check CDL often for the latest General Hospital spoilers, updates and news.