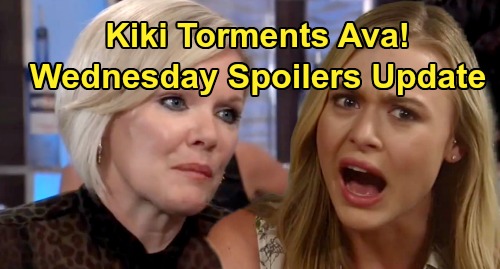 Franco will assure Kim that he knows what it’s like to be in love with her. He’ll get that this is a lot for Kim to deal with, but he’ll hope she’ll hear him out anyway. GH spoilers say Kim will indeed drop her guard a bit. She’ll be a pal to Franco like Monica advised, but that sounds awfully dangerous! As Kim gets pulled toward the past, romantic feelings should follow.

In the meantime, Lulu Falconeri’s (Emme Rylan) divorce will be final. She’ll track Maxie Jones (Kirsten Storms) so she can tell her the news in person and get some support. Lulu had to make the excruciating decision to let Dante Falconeri (Dominic Zamprogna) go. She still loves him and knows he loves her as well, but this is their path forward right now.

While Maxie comforts Lulu, Cameron Webber (William Lipton) will feel like his car is a curse. He’ll be frustrated in the driver’s seat as Trina Robinson (Sydney Mikayla) sits next to him. Cameron may run into some car troubles that leave him exasperated, but he’s likely missing out on some hidden treasure!

Drew found out the money Shiloh’s so desperately searching for was placed in Tex’s wife’s car. Curtis Ashford (Donnell Turner) argued that cash was long gone, but Drew disagreed. He feels confident he knows where it is, and the answer is Cam’s vehicle. Oscar Nero Quartermaine (Garren Stitt) somehow ended up with this car, which was later given to Cam in Oscar’s will.

Drew will blow Elizabeth Baldwin (Rebecca Herbst) away when he reveals this bombshell. She’ll realize Cameron’s been driving around with a ton of money, but he has no idea. General Hospital spoilers say Drew will want to find Cam pronto. He’ll hope the cash is still there just as he expects.

Over with Peter August (Wes Ramsey), he’ll show up at Pentonville for a reluctant discussion. Peter won’t be thrilled about interacting with Shiloh, but he’ll be curious after that ominous comment. Shiloh is clearly up to something, so Peter will want to know what it is.

Unfortunately, Shiloh knows dirty details that could crumble Peter’s world. He’ll make it clear that he could sink Peter, but he may not be believed at first. Peter might call Shiloh’s bluff, but Shiloh’s got the goods! It sounds like Peter was who met with Helena Cassadine (Constance Towers) in Shiloh’s flashback, so this could be pretty damaging information.

Peter has worked hard to overcome his past and bad reputation, so Shiloh’s threat could bring major fears. He may blackmail Peter into helping him out, but this will surely lead to trouble! Elsewhere, Ava Jerome (Maura West) will face a nightmare featuring her dead daughter. Kiki Jerome (Hayley Erin) will torment Ava in her sleep, so this rattled mom will fill Chelsea Lambas (Jen Ray) in later.

Chelsea will get updates on what Kiki revealed to Ava in the dream, so maybe she can provide some guidance. Of course, Kiki herself is the only one who can forgive Ava. It could be a while before Kiki can get past their issues and set Ava free.

Finally, Dev Cerci (Ashton Arbab) will be on the hot seat. The deposit vanished from the warehouse, so Jason Morgan (Steve Burton) will want some answers. Dev may be innocent this time, but it could take some work to convince Jason. Sonny Corinthos (Maurice Benard) will be called in on this, so we’ll see what Dev has to say for himself.