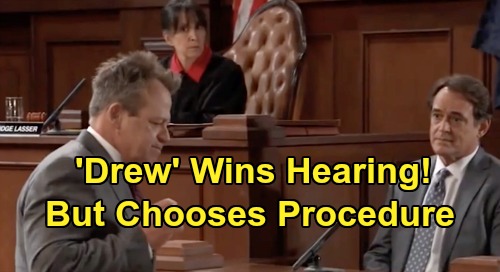 General Hospital (GH) spoilers tease that Franco Baldwin’s (Roger Howarth) fate will soon be decided. The judge is facing a difficult dilemma since her ruling will deliver devastation either way. Martin Gray (Michael E. Knight) has fought hard to make sure “Drew Cain” keeps his memories, but Scott Baldwin (Kin Shriner) has put up a good fight, too. He’s working hard to give Elizabeth Baldwin (Rebecca Herbst) back her husband.

However, this is ultimately about what’s best for Franco. The judge will weigh all the facts in the case and announce that she’s made a decision. Based on all the evidence, it looks like “Drew” will be allowed to remain “Drew.” The judge will likely argue that Franco’s competency has been proven – maybe not as Franco, but as a logical, healthy human being.

If Liz was allowed to make the decision for Franco and forced him into the procedure, it could go horribly wrong. Franco might end up dead or at least a vegetable. As of right now, he may have an altered state of mind, but he’s free to live a perfectly normal life as someone else – that someone being “Drew.”

This judge could be sending a healthy man to his death if she sided with Liz on this. There’s just too much at stake. With that in mind, it seems Martin will score a victory for Franco. General Hospital spoilers point to a terrible defeat for Liz, so that makes sense. Liz will be deeply distraught next week, and she wouldn’t be if she knew Franco might come back to her.

GH spoilers also reveal Scott will be brainstorming and looking for help. He wouldn’t need to do any of that if he got the ruling he wanted in court. There were also signs that Liz and Cameron were starting to get through to “Drew” – especially Cam. “Drew” even urged Martin to stop badgering the teen at one point, so things are starting to shift.

We’ve also got the bombshell about Kim Nero (Tamara Braun) drugging the real Drew and trying to force him to have a baby. General Hospital spoilers say “Drew” will rethink their relationship after he hears this news. He’ll begin to see that Kim has been making some iffy decisions.

General Hospital is setting up a story where “Drew” is torn and will most likely be given the choice himself. It’s better for drama’s sake if “Drew” sacrifices his memories to keep Franco’s promise. It would allow “Drew” to be his usual heroic self.

Of course, “Drew” can’t predict the outcome of this procedure. He’d just be taking the risk in hopes of doing the right thing and reuniting the “Friz” family. Regardless, all the info suggests “Drew” will be allowed to make that decision, not forced against his will. We’ll give you updates as other GH details emerge. Stay tuned to the ABC soap and don’t forget to check CDL often for the latest General Hospital spoilers, updates and news.