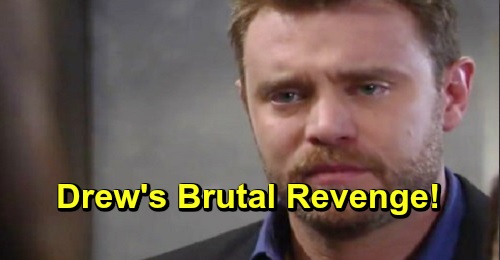 General Hospital (GH) spoilers reveal that the mission to find Drew Cain (Billy Miller) has moved beyond a rescue and turned into a recovery. His loved ones will slowly have to accept that he’s gone and move on with their lives. However, GH has certainly left the door open for Drew’s shocking comeback. No body is typically a guarantee that the character will come back in some form down the road.

It’s possible Miller will return to the role one day. If we go by Kelly Monaco’s (Sam McCall) tweet about Miller’s exit, something shady obviously went down behind the scenes. Still, business is business. If Miller is offered the right deal at some point, it’s easy to imagine him reprising the part of Drew.

Nevertheless, the role could just as easily be recast. General Hospital never developed the character much after Miller switched from Jason Morgan (now played by Steve Burton) to Drew. We’re learning a little more about Drew through Franco Baldwin’s (Roger Howarth) memories, but that’s not really the same thing. It’s tough to separate Franco from Drew since we all see Franco when we look at him.

Drew deserves a chance to return and get his own memories back. Perhaps Andre Maddox (Anthony Montgomery) will have perfected the procedure by the time Drew potentially reappears. There’s a possibility Drew’s plane crash could even be helpful in some ways. What if he survived and has amnesia somewhere? Maybe having Drew’s mind as more of a blank slate would be a good thing. Eliminating Jason’s memories from the mix might work in his favor.

That was something Drew wanted to do anyway. He hated remembering things from Jason’s life and knowing he hadn’t lived them. Unfortunately, Drew couldn’t risk losing the memories he’d made of his kids. Could they have been taken from him anyway due to this downed plane? It’d be a simple explanation for Drew’s absence.

Of course, the show could also take the “being held against his will” route. No matter how they might choose to set up Drew’s return, they paved the way for it to open. GH could’ve just given Drew a dead-dead exit if they wanted him gone for good. We could’ve seen him die right onscreen like Nathan West (Ryan Paevey).

Since that didn’t happen, it gives General Hospital fans hope for Drew’s return – especially since Peter August (Wes Ramsey) needs to be exposed. How fitting would it be if Drew was the one to do that? Perhaps he learned something significant just before he was “killed.” Miller doesn’t seem poised to come back anytime soon, but a recast could. This presumed death might’ve been GH’s effort to buy time and select the right fit.

Whatever the case, General Hospital spoilers say Peter will get what he’s got coming eventually. Will Drew contribute to Peter’s brutal takedown? Will Peter’s worst threat be the one he’s dismissed completely? We’ll give you updates as other news comes in. Stay tuned to the ABC soap and don’t forget to check CDL often for the latest General Hospital spoilers, updates and news.