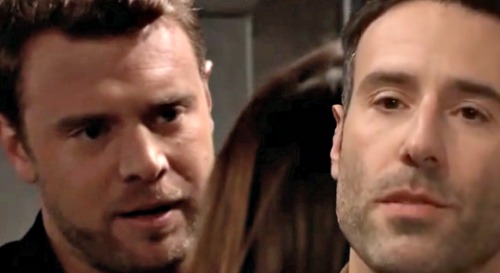 General Hospital (GH) spoilers tease that Shiloh Archer (Coby Ryan McLaughlin) may focus on another target soon. After Margaux Dawson (Elizabeth Hendrickson) ran into Shiloh, she seemed really into Every Day Is a New Dawn. That’s the book Dawn of Day pushes on all its community members.

Margaux admitted she became interested in DoD as a way to deal with her guilt. She mentioned how she betrayed a friend by keeping his memory flash drive from him, so Shiloh was suddenly disturbed. He knows all about Drew Cain’s (Billy Miller) memory troubles, but he was relieved to find out Drew was skipping the procedure. Now Shiloh’s undoubtedly concerned all over again.

As long as that flash drive’s in Margaux’s possession, there’s a chance Drew will change his mind and recapture what he’s lost. You can bet Shiloh will want to get his hands on it. General Hospital spoilers say Drew will become increasingly involved in Shiloh’s storyline. He’ll team up with Jason Morgan (Steve Burton) later this week to connect a few dots.

Shiloh will also approach Dr. Kim Nero (Tamara Braun) to offer assistance if he can. After Oscar Nero’s (Garren Stitt) setback, Shiloh will assure Kim that he wants to help. However, Kim won’t trust Shiloh or his organization. She’ll make it clear that she doesn’t need Shiloh interfering, especially since Oscar doesn’t have much time left.

GH spoilers say Drew should become even more fearful after Shiloh’s latest move. He won’t want shady Shiloh hanging around Kim or Oscar. Even though Margaux hurt Drew by trying to force a deal over the flash drive, he won’t want her to get hurt either. Drew may try to talk some sense into Margaux when he sees her falling into Shiloh’s trap.

Of course, it’s possible Margaux isn’t falling into a trap at all. What if she’s the one doing the trapping? Let’s be honest: Margaux doesn’t seem like a Dawn of Day kind of gal. She’s showed some vulnerability here and there thanks to her storyline with Sonny Corinthos (Maurice Benard), but she’s still tough and skeptical of everything. Why would she buy all this DoD baloney?

General Hospital spoilers say Margaux will have an important meeting on March 22. She’ll discuss something important with Jordan, so could that be about Shiloh? The PCPD will need a new case to focus on without a serial killer to catch. Perhaps taking down Shiloh will become their focus.

Margaux could be laying the groundwork right now. Since she’s the DA, she wouldn’t be suspected as someone doing any kind of undercover assignment. Margaux’s connection to Drew and the flash drive would help her reel Shiloh in. Regardless, some danger is coming up for Margaux, so she may end up in over her head eventually.

Do you think Margaux is playing Shiloh like Sam McCall (Kelly Monaco) is or is she genuinely buying what he’s selling? Will Drew have to save Margaux? Will this lead to Drew ultimately getting his memories back? We’ll give you updates as other GH news comes in. Stay tuned to the ABC soap and don’t forget to check CDL often for the latest General Hospital spoilers, updates and news.