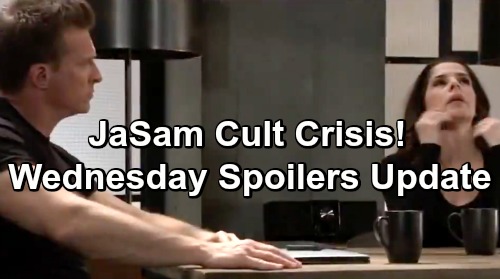 General Hospital (GH) spoilers update for Wednesday, March 13, tease that Dr. Kevin Collins (Jon Lindstrom) will reflect on the horror he unleashed. His attempt to rehabilitate Ryan Chamberlain (Jon Lindstrom) led to a twin swap and a whole lot of heartache. People lost their lives thanks to Ryan, so Laura will try to make sense of all this. She’ll start by asking when Kevin found out Ryan was alive.

Kevin will reveal that info and give Laura updates on the rest of the story as well. He’ll be sorry for unleashing this monster on Port Charles, but he can’t turn back time. Kevin can only live with the damage. Ava Jerome (Maura West) certainly faced plenty of destruction thanks to Ryan’s twisted scheme. Not only did he kill Kiki Jerome (Hayley Erin), Ryan duped Ava into falling in love with him.

General Hospital spoilers say Ava will vent to Franco Baldwin (Roger Howarth) on Wednesday. As she rages over Ryan’s actions, Franco will suggest it sounds like Ava wants him to still be alive. Ava will admit that’s the case, but only because she wants to kill him herself. Perhaps Ava will get the chance eventually since Ryan’s body was never found.

In the meantime, Ava will soon encounter Kevin and assume he’s his evil twin. To be fair, she’ll be full of liquor when it happens. Ava won’t be able to tell the difference in her drunken state, so Kevin will get an earful later this week.

Over with Cameron Webber (William Lipton), he’ll prepare for the worst. He’ll ask Elizabeth Webber (Rebecca Herbst) how bad his punishment’s going to be, but she may go easy on him. Cameron kept a cool head during Oscar Nero’s (Garren Stitt) crisis and even passed along a tip that helped save Ava along with Carly Corinthos (Laura Wright). The trip turned out awful enough, so Liz probably won’t go too far with added misery.

Across town, Jason Morgan (Steve Burton) and Sam McCall (Kelly Monaco) will have another Shiloh Archer (Coby Ryan McLaughlin) takedown meeting. They’ll choose to officially call Dawn of Day a cult and rev up their efforts to get Kristina Corinthos-Davis (Lexi Ainsworth) out of it. Sam and Jason need to act fast before Shiloh pulls Kristina in too deep.

Unfortunately, that’s already happening and Valerie Spencer (Brytni Sarpy) can tell. She’ll tell Kristina that she feels like she’s losing her friend. Thanks to Shiloh and DoD, Kristina is starting to distance herself from the people she cares about. That’s only going to get worse, especially after Valerie criticizes Shiloh’s speech at his next rally. Kristina will decide this community has to be her one and only priority.

Other General Hospital spoilers say Harmony (Inga Cadranel) will be fed up with her former flame. That’s Shiloh, who apparently had a thing for Harmony once upon a time – or at least pretended to until he got what he wanted. Harmony will blast Shiloh over how he’s changed, so GH fans should get a glimpse of his dark side. You can bet Shiloh won’t appreciate the way Harmony’s standing up to him.

General Hospital has a fantastic episode in store, so stay tuned. We’ll keep you posted as other GH news comes in. Stick with the ABC soap and don’t forget to check CDL often for the latest General Hospital spoilers, updates and news.