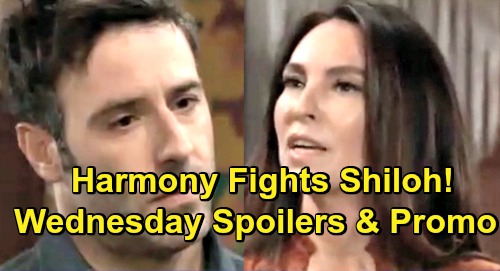 General Hospital (GH) spoilers for Wednesday, March 13, tease that Cameron Webber (William Lipton) will express his regrets and prepare to face his punishment. He drove the other teens all the way to Niagara Falls, where Oscar Nero (Garren Stitt) had his worst seizure yet. Cam also crossed paths with Ryan Chamberlain (Jon Lindstrom), which wasn’t planned but still left his mom reeling.

Elizabeth Webber (Rebecca Herbst) may not let Cameron off the hook, but she’ll understand that he’s already been through a lot. She probably won’t be too hard on her son since he had to cope with Oscar’s ordeal and face a serial killer. That’s almost punishment enough.

Plus, Cameron’s info was able to help Jason Morgan (Steve Burton) and Laura Webber (Genie Francis) get to Ava Jerome (Maura West) in time. Without Cam’s tip, both Ava and Carly Corinthos (Laura Wright) might not have survived. It was actually pretty lucky that this teen road trip happened!

Over with Valerie Spencer (Brytni Sarpy), she’ll want to hang out with Kristina Corinthos-Davis (Lexi Ainsworth). Since Kristina’s been so caught up in Dawn of Day, Valerie will feel like she’s losing her friend. Kristina will look uncomfortable over the suggestion. She’ll end up inviting Valerie to a DoD rally, but Valerie’s criticism of Shiloh Archer (Coby Ryan McLaughlin) will cause even more issues.

In the meantime, Shiloh will have another tense conversation with Harmony (Inga Cadranel). She’ll get agitated when Shiloh refuses to see things her way. Harmony will wonder what happened to the man who professed his love for her. That guy is apparently long gone since Shiloh’s been busy cozying up to Kristina as well as Sam McCall (Kelly Monaco).

Of course, Shiloh has a sneaky agenda, but Harmony won’t like that she was just cast aside. She’ll believe Shiloh has changed, so that should leave them stuck in conflict. Over with Sam, she’ll talk to Jason about DoD and contend that should call it what it really is: a cult. GH fans have been calling it that for quite a while now, so it’s good that Sam will finally acknowledge the obvious.

Other General Hospital spoilers say Laura will question Dr. Kevin Collins (Jon Lindstrom) about his brother. She’ll want to know when he found out Ryan was alive. Kevin will look remorseful as he prepares to spill his tale. He’ll recap how he located Ryan and foolishly thought he could rehabilitate him. Now it’s clear Kevin made a terrible mistake that cost multiple lives.

Down the hall at GH, Ava Jerome (Maura West) will show up plastered. She’s been trying to drink her pain away offscreen, but she’ll remain an emotional wreck when she speaks with Franco Baldwin (Roger Howarth). After Franco heads the whole ugly story, he may point out that at least Ryan is presumed dead.

However, Ava won’t be satisfied with the way things turned out for Ryan. She’ll snarl that she hopes Ryan’s alive so she can kill him. Ava will confuse Kevin for Ryan later this week, so that’ll bring Ava’s fierce outburst and some difficult moments for the doc.