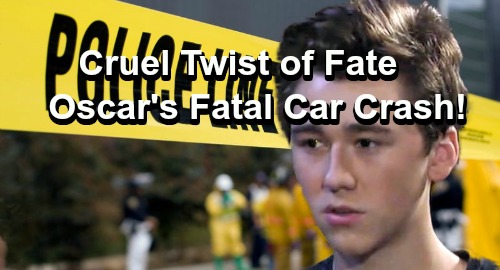 General Hospital (GH) spoilers tease that there could be a big twist brewing in Oscar Nero’s (Garren Stitt) storyline. Oscar was given hope through a clinical trial, but it just didn’t pan out. Dr. Terry Randolph (Cassandra James) informed Oscar that his tumor hadn’t shrunk, so he could have as little as a few weeks left to live.

Now that Oscar has accepted his fate, he’s just trying to live life to the fullest. However, many GH fans feel like this scenario is bit odd. General Hospital is just letting us sit here and wait for Oscar to die. Will he really just slowly fade until he can’t walk or talk? That seems awfully brutal for viewers to watch. This story also appears to be taking much longer than most GH watchers would like.

With that in mind, perhaps General Hospital has a different end planned for Oscar. Maybe they could go with something quicker and more surprising. Oscar recently had that mishap as he tried to enter the catacombs with Josslyn Jacks (Eden McCoy). That was a close call, but Oscar may not be so lucky next time.

After the drama was over, Oscar told Dr. Kim Nero (Tamara Braun) that he understood her concerns. He promised to be smarter about his choices, but he admitted he was still going to take some risks. Oscar just doesn’t want to die with any regrets.

Now let’s consider the car Oscar received for Christmas and his recent conversation with Joss. He would love to get his driver’s license before he kicks the bucket. Of course, Oscar shouldn’t be allowed to get his license since he has frequent seizures. That’s not safe for him or anyone else on the highway.

Nevertheless, soap teens will be soap teens! Oscar went on and on about his driver’s license, so it seemed like a significant clue. He may not mention his condition when he goes to get one, presumably without Drew Cain (Billy Miller) and Kim’s knowledge. If nothing else, Oscar may just skip it and hit the road without a license at all.

Could it be a car crash that actually claims Oscar’s life? Will a seizure send him veering into another vehicle or perhaps a tree? Will Josslyn be gravely injured as well? This might be a way to just rip the bandage off for fans and send Oscar to his grave. It’d also be incredibly dramatic for Josslyn to wake up and learn that Oscar’s gone.

Then again, there’s always a chance a collision could lead to some shocking miracle. Maybe Oscar could end up being treated by a new doctor as a result of all this. No one else has any hope, but some determined doc might see a glimmer of it and rely on sneaky connections. In the soap world, there’s always some cure left out there somewhere!