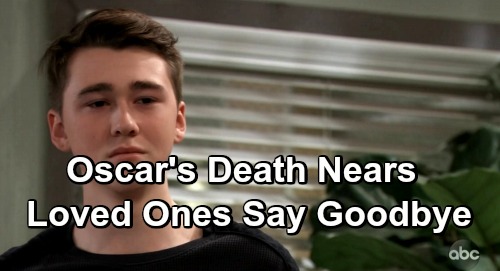 General Hospital (GH) spoilers tease that Oscar Nero’s (Garren Stitt) health will take another hit. He’s accepted that he’s dying, but he believes he’s got a few more weeks to fulfill his dreams and say his goodbyes. However, Oscar’s setback could raise doubts about his ability to pull everything off. He’ll most likely have a seizure like the ones we’ve seen already. Oscar should be having more of those as he nears the end.

Of course, Oscar may not be so quick to recover next time. He was doing pretty well after the catacombs chaos, but it won’t be long until he’s headed downhill fast. General Hospital spoilers say reality will set in for Oscar’s loved ones. They’ll realize time is truly running out, so they need to savor every moment and brace themselves for this loss.

Josslyn Jacks (Eden McCoy) has also accepted Oscar’s fate, but that won’t make this process any easier. She loves Oscar and wishes he could stick around for so many more adventures. Oscar is Josslyn’s first love, so he’ll always hold a special place in her heart.

It’s going to be hard for Joss to let Oscar go, but it looks like she’ll have no choice. Unless GH whips out a soapy miracle, Oscar is heading toward the end of the road. General Hospital spoilers say Oscar may have to skip some of his crucial bucket list items. He just can’t cram all his desires into such a short amount of time.

Dr. Terry Randolph (Cassandra James) warned that Oscar’s speech and walking could be affected as this tumor takes a toll. He may not quite be himself as his farewell approaches. Drew Cain (Billy Miller) will have a difficult time as Oscar fades fast. He’ll wish he could’ve known his son sooner and watched him grow up. Drew will have so few memories to carry with him into the future.

Dr. Kim Nero (Tamara Braun) will also be crushed by the overwhelming grief she feels. Oscar’s been at the center of her life since he was born. Kim won’t know who she is if she’s not a mom. Drew may suggest that no one can ever take that title away from her. Kim will always be Oscar’s loving mother, even after he’s gone.

Julian Jerome (William deVry) will also be there for Kim in her time of need. This Drew, Kim and Julian love triangle will rev back up, but one main will gain a definite advantage soon. Will it be Drew or Julian that Kim ends up leaning on the most? We’ll give you updates as other GH news comes in. Stick with ABC soap and don’t forget to check CDL often for the latest General Hospital spoilers, updates and news.