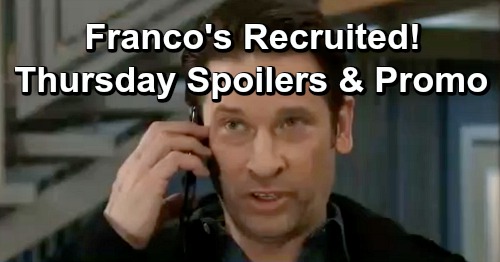 General Hospital (GH) spoilers for Thursday, January 31, tease that Alexis Davis (Nancy Lee Grahn) will attend a Dawn of Day seminar. She’ll definitely have her doubts about what this will accomplish, but Kristina Corinthos-Davis (Lexi Ainsworth) will insist that it could be helpful. She’ll just want Alexis to give DOD’s teachings a chance.

Alexis will try to keep an open mind as Shiloh pushes for some changes. He’ll put Alexis and Kristina face to face for a therapeutic confrontation. Shiloh will urge them to share what they really want from each other. General Hospital spoilers say Kristina will blurt out that she wants respect, so Shiloh will think they’re really getting somewhere. He’ll even have Alexis convinced of that by the end of all this!

Over with Dr. Kim Nero (Tamara Braun), she’ll continue to bond with Drew Cain (Billy Miller). He’ll eventually get a bit rattled, so maybe he’ll realize his feelings are growing. GH fans can expect another kiss between Drew and Kim on next week’s new GH episodes, February 4-8, so they could become a real item before long.

Meanwhile, Valentin Cassadine (James Patrick Stuart) will seek another favor from Peter August (Wes Ramsey). He’ll note that if Peter does this for him, he’ll be in his debt. Peter may suggest that Valentin already owes him big time. He recanted his statement to the cops, which allowed Liesl Obrecht (Kathleen Gati) to go free and prevented Valentin’s secret from getting out.

Nevertheless, Valentin will need Peter’s help once more. He’ll do his best to secure the assistance he needs while Liesl grills Maxie West (Kirsten Storms). It looks like she’ll be quite interested in Maxie and Peter’s growing bond. Liesl’s always hoping for more ways to gain the upper hand, so you can bet she’ll exploit the situation if she can.

Other General Hospital spoilers say Julian Jerome (William deVry) will give Ava Jerome (Maura West) a warning. He’ll understand that Ava’s still distraught over Kiki Jerome’s (Hayley Erin) murder, but he won’t think avenging her daughter is the right call. It’ll just come back to bite Ava, so Julian will push her to settle down and let the cops sort it out.

At the PCPD, Jordan Ashford (Briana Nicole Henry) and Harrison Chase (Josh Swickard) will go over the serial killer case. They’ll rehash every detail and hope that something new clicks into place. Chase and Jordan won’t have all the answers, but they’ll know someone who might be able to pitch in.

General Hospital spoilers state that Jordan will make a call on Thursday. She’ll insist that the person on the other end may have information to solve Kiki’s murder. GH’s preview video also shows Franco Baldwin (Roger Howarth) on the phone saying, “Whatever it is, I didn’t do it.” Is he the one Jordan will get in touch with?

Franco initially wanted to help the cops out with this case. Due to his past, Franco can get inside the mind of this murderer and potentially predict his behavior. “Dr. Kevin Collins” aka Ryan Chamberlain (Jon Lindstrom) suggested that wasn’t a good idea, but maybe Jordan will push the issue.

Regardless, major trouble’s brewing for Franco. Ryan will use some shocking tactics to pin his crimes on Franco next week, so stay tuned for serious drama. We’ll give you updates as other GH news comes in. Stick with the ABC soap and don’t forget to check CDL often for the latest General Hospital spoilers, updates and news.