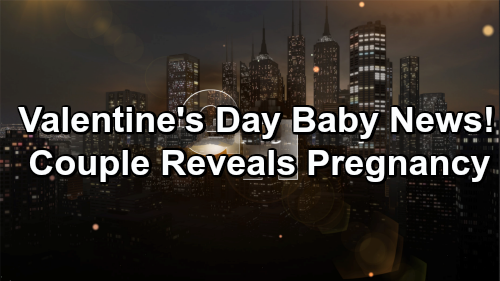 General Hospital (GH) spoilers tease that it’s almost time for more baby drama in Port Charles. There’s plenty of it going on thanks to the secrets involving “Wiley” Cooper-Jones, but GH has to put another bun in the oven. They need to look ahead and set up some future baby shockers, so a big announcement’s on the way.

As a bonus, this will be a nice Valentine’s Day surprise for a few PC residents. General Hospital spoilers say one couple will reveal that they’re expecting a baby. There obviously aren’t too many pairings that would be in a position to do that. This makes it sound like they’ll gather their loved ones to share the good news.

Jason Morgan (Steve Burton) and Sam McCall (Kelly Monaco) recently hit the sheets, but it’d be impossible for all the pieces to fall into place by February 14. Of course, GH fans won’t give up on a future “JaSam” baby. You never know if Sam and Jason might have new addition down the road.

Ava Jerome (Maura West) would be completely freaked out if she ended up pregnant by “Dr. Kevin Collins” aka Ryan Chamberlain (Jon Lindstrom). They wouldn’t be announcing it cheerfully as General Hospital spoilers suggest. Ava would probably be in panic mode trying to figure this mess out on her own. It’s doubtful GH would want to give her serial killer spawn anyway.

Carly Corinthos (Laura Wright) and Sonny Corinthos (Maurice Benard) will be off on a Valentine’s Day getaway, so they’re thankfully off the table. Sonny doesn’t need any more children! It’s nice to know they won’t be in town to make any announcements.

Nina Reeves (Michelle Stafford) has been told she can’t have children, so that should stick in this case. It’d be weird for Nina to realize she’s pregnant and announce it so soon. Valentin Cassadine (James Patrick Stuart) and Nina would want to be careful about it. The pregnancy would be high-risk, so they’d wait until much later if they got a miracle baby.

Next, there’s Elizabeth Webber (Rebecca Herbst) and Franco Baldwin (Roger Howarth). They’re a solid couple who could reasonably make a baby announcement, but there’s a bit of a problem. Franco will be accused of attacking Lulu Falconeri (Emme Rylan), so all kinds of criminal chaos will be going on.

Plus, Franco and Liz are already struggling to help Aiden Webber (Jason David). GH is throwing a ton at them right now, so there’s no room for baby mayhem. It’s tough to believe they’d make a pregnancy announcement in the middle of everything they’re dealing with.

Who does that leave? Jordan Ashford (Briana Nicole Henry) and Curtis Ashford (Donnell Turner) are probably the couple to bet on. They’re newlyweds who have undoubtedly been heading to the bedroom often. They make sense as a couple that would be in a position to announce a pregnancy.

This could also raise the serial killer stakes. Jordan may get dangerously close to the truth eventually. If Ryan goes after Jordan while she’s pregnant, there’d be an added layer of suspense and fear.

Do you think Jordan and Curtis are the parents-to-be? Will they announce their impending bundle of joy on Valentine’s Day? We’ll give you updates as other GH details emerge. Stay tuned to the ABC soap and don’t forget to check CDL often for the latest General Hospital spoilers, updates and news.