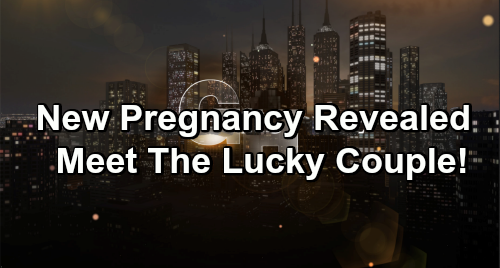 General Hospital (GH) spoilers tease that February sweeps will bring some big surprises. Some of those surprises will come on Valentine’s Day. As Port Charles prepares for the most romantic day of the year, one couple will have an especially good reason to celebrate.

It’s been a while since Maxie West (Kirsten Storms) and Nelle Benson (Chloe Lanier) gave birth, so it’s time to kick off another baby storyline. Michael Corinthos (Chad Duell) still hasn’t found out that Jonah Corinthos is alive, but these things take time. Baby swap schemes are often year-long drama extravaganzas, so that one will have to simmer for a while longer.

However, it’s wise to go ahead and put another bun in the oven. Even though soaps tend to speed up pregnancies, we’re usually looking at six months or so of preparation. That’s better than the nine in real life, but General Hospital is undoubtedly thinking about what kind of story they want to do down the road. Since they’re going with a baby plot of some sort, they need to get the ball rolling.

That’s exactly what GH will do with a major holiday announcement. One lucky lady is going to be a mom! Here’s what we know about this pregnancy shocker. General Hospital spoilers say a couple will announce the news on Valentine’s Day. We can get some good clues from that. For starters, it suggests that it’s a solid pairing. It makes it sound like they’re happy about the unexpected addition.

There are certainly some characters who wouldn’t be, so that makes a difference. The fact that they’re announcing it also hints that they’ll know beforehand. GH viewers may not be brought in the loop, but the couple has to find out before they spread the word. That gives us a timeframe as far as when this woman actually got pregnant.

“JaSam” fans may be bummed, but this seemingly rules out Sam McCall (Kelly Monaco). She just now hit the sheets with Jason Morgan (Steve Burton), so there’s no way she can find out, process and announce by Valentine’s Day. That’s especially true since she’ll be cozying up to Shiloh Archer (Coby Ryan McLaughlin) as part of a plot.

Elizabeth Webber (Rebecca Herbst) and Franco Baldwin (Roger Howarth) could be a possibility. It would turn their lives upside down since they’re already dealing with a ton of family issues, but “Friz” fans would be ecstatic. Franco and Liz would definitely see it as a blessing eventually, too.

Still, we’re thinking they’re not as likely since a spontaneous wedding is coming up. We also know Liz will do something drastic to show Franco how much she loves him. What better way to do that than to propose marriage on the spot?

Honestly, these two need to just marry and be done with it anyway. Liz and Franco have had too many failed nuptials, so it’s time to get serious about making this commitment. That brings us to the couple that’s perhaps the most likely. The newlyweds, of course! Jordan Ashford (Briana Nicole Henry) and Curtis Ashford (Donnell Turner) are going strong, so it’s the perfect opportunity to spring a baby on them.

Although Jordan and Curtis are working on the serial killer case, that’ll be winding down soon. Will baby prep be their next challenge to conquer? General Hospital spoilers this announcement should bring some fun scenes, so stay tuned.

Who do you think is the expectant mystery couple? Who would you like to see get a new bundle of joy? We’ll give you updates as other GH details emerge. Stick with the ABC soap and don’t forget to check CDL often for the latest General Hospital spoilers, updates and news.