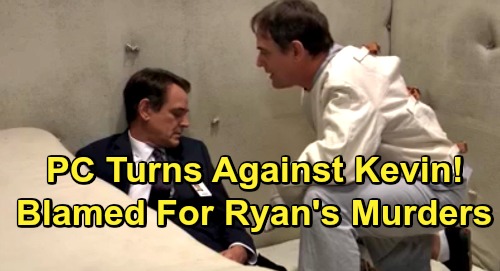 General Hospital (GH) spoilers tease that Kevin Collins (Jon Lindstrom) may be in some serious trouble. Thus far, Kevin has been welcomed back into Port Charles life with open arms, especially by Laura Webber (Genie Francis), but it seems that things will soon take a turn as everyone learns the details about Ryan Chamberlain’s (Jon Lindstrom) imprisonment at Ferncliff by Kevin and his ultimate escape.

Of course, viewers know that Kevin held Ryan captive in Ferncliff hoping that he could somehow rehabilitate him. That’s going to come as a huge shock to a bunch of Port Charles residents, who won’t like the fact that a dangerous murderer who terrorized so many people was so close to them for so long and they had no idea of that fact.

And then Kevin is going to have some explaining to do about how Ryan managed to escape his captivity. It was Kevin’s carelessness that led Ryan to be able to overpower him, and there are a lot of people who may not be so understanding about that when the details come out.

First off, there’s Laura, who will probably be appalled that Kevin has apparently known for a long time that Ryan was alive. Kevin kept Ryan’s existence a secret from her and everyone else, and she’ll probably be upset with him for his actions. The two will have a lot to overcome to get their marriage back on track and to a place of trust.

Then, there’s Felicia Scorpio (Kristina Wagner), who will be horrified that Kevin essentially brought Ryan back into her life. She and Mac Scorpio (John J. York) will probably have some choice words for Kevin. Kevin will have shattered the trust he had with some of his oldest friends.

And then there’s Ryan’s victims, who will surely be livid with Kevin. Lulu Falconeri (Emme Rylan) and Franco Baldwin (Roger Howarth), who were both stabbed by Ryan, probably won’t be so understanding to learn that Kevin knew Ryan was alive and didn’t bother to tell anyone. And Ava Jerome (Maura West) will almost certainly blame Kevin for Kiki Jerome’s (Hayley Erin) death; after all, he made it possible for Ryan to be on the loose and undetected.

It probably won’t be easy for Kevin to reassume his life in Port Charles, at least not right away. Of course, he didn’t want any of this to have happened, but he may face blame and retaliation for a while. Do you think that Kevin’s to blame for what Ryan did? Stay tuned to the ABC soap and don’t forget to check CDL often for the latest General Hospital spoilers, updates, and news.