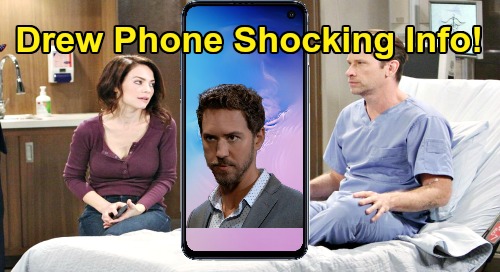 General Hospital (GH) spoilers tease that Cameron Webber (William Lipton) might be sitting on some explosive information. As GH viewers will remember, right before “Drew” aka Franco Baldwin (Roger Howarth) underwent the memory reversal procedure to become Franco again, he had a little talk with Cameron. And during that conversation, he gave Cameron his smartphone to hold onto.

There seemed to be something significant about the phone handoff, but nothing more about it has been mentioned on the show to date. Of course, Cameron has been pretty wrapped up in drama since then – first in the anxiety of waiting for the memory reversal procedure’s outcome, then in the terror after the gunman came into the OR and tried to kill Franco and Andre Maddox (Anthony Washington).

And most recently, Cameron’s been busy celebrating Franco’s return and the holidays with his family. He probably hasn’t had much time to think about that phone and what it might possibly contain. Since this is a smartphone that we’re talking about, it could contain a variety of things – notes from “Drew” to the people he knew, files, or just about anything.

It certainly seems like “Drew” really wanted Cameron to have the phone, probably realizing that at some point later he’d remember that he had it and might go snooping around on it to see what “Drew’ might have left behind.

So, what could be on that phone? Well one possibility is that there’s something on it that could seriously incriminate Peter August (Wes Ramsey). The one thing that Peter has been afraid of all along is that one of the Drews – either the real Drew Cain (Billy Miller) or the version of Drew that inhabited Franco’s body – would remember that he is the person who helped Helena Cassadine (Constance Towers) capture him in Afghanistan years ago.

“Drew” never indicated to anyone that he had any memories of Peter being involved in his capture, but it’s possible that he indeed had those memories and left a detailed account of the whole thing in a file on his phone. “Drew” was a pretty secretive guy, and he might have had some memories surface at the last minute, memorialized them on his phone, and left them with a trusted person…Cameron.

If that’s the case, then we could soon see a race for various people to get their hands on that phone. Once Cameron remembers he’s got the phone, he may start wondering why “Drew” gave it to him, and he could need help accessing what’s on it. And if Peter gets wind that Drew left something behind, then he could go on a mission to get his hands on the phone, which could put Cameron in danger.

It would also be interesting to see Jason Morgan (Steve Burton) and/or Anna Devane (Finola Hughes) get involved in trying to decode whatever might be on the phone. We’ll see what ends up happening here, but something’s definitely up with that phone, and “Drew” certainly left it behind for a reason.

What do you think is on “Drew’s” phone? Stay tuned to the ABC soap and don’t forget to check CDL often for the latest General Hospital spoilers, updates, and news.