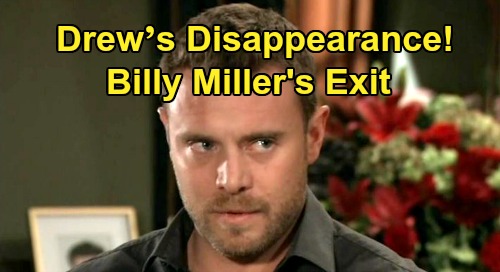 General Hospital (GH) spoilers reveal that Billy Miller’s (Drew Cain) onscreen exit is drawing near. He wrapped filming back on July 26, so Miller’s time as Drew is winding down. There have been conflicting reports about Miller’s exact final airdate, but GH’s filming schedule points to him wrapping things up before the end of August.

Of course, everyone’s wondering how Miller’s Drew will leave the canvas. The story isn’t set up for Drew to just suddenly leave town, so we can probably rule that one out. However, there also hasn’t been an official recast announced. That likely means no one is stepping into the role of Drew right away – although there could certainly be plans for a Drew recast later.

With all that in mind, we’re likely looking at one of a few options: death, presumed death, long-term coma or sudden disappearance. That last one’s looking more and more likely. General Hospital spoilers suggest Drew may find himself in danger soon. Shiloh Archer (Coby McLaughlin) will try to work out a trade on August 20. Then on August 21, Drew will rush to track down Cameron Webber (William Lipton) – apparently before it’s too late!

Could this have something to do with Cam’s rage toward Shiloh? Drew may fear Cameron’s going to do something he regrets. If Shiloh is somehow on the loose at that point, Cam could easily try to stage some setup and take Shiloh out. However, this could just as easily be Shiloh’s setup for Drew – perhaps payback for derailing his plans.

Whatever the case, General Hospital spoilers reveal a warehouse issue will emerge for Sonny Corinthos (Maurice Benard) when this drama’s going down. That could be somewhere for Shiloh to draw Drew out. Curtis Ashford (Donnell Turner) will get a clue on August 22, and Sam McCall (Kelly Monaco) has a disturbing email headed her way on August 23, which is thought to be around when Miller departs.

What do all these puzzle pieces mean? If we put them together, we could be looking at Drew’s sudden disappearance. Sam certainly wouldn’t be notified of Drew’s death or presumed death via email. She wouldn’t be notified about a coma that way either – and that exit would honestly be lackluster since Franco Baldwin’s (Roger Howarth) already been in one. There’s no need to do the same thing.

Could Shiloh be responsible for Drew’s vanishing act? Could it be someone else from Drew’s past instead? This could kick off a mystery for Sam and Jason Morgan (Steve Burton) to solve. It could potentially pave the way for a Drew recast down the road. There’s no guarantee that’s what Sam’s disturbing email will be about, but the timing makes sense.