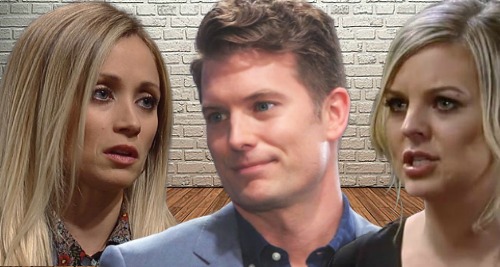 General Hospital spoilers tease that Dustin Phillips (Mark Lawson) will be at the ready to swoop in and lend Lulu Falconeri (Emme Rylan) a helping hand when she needs it – but will Lulu accept his offer for a date? General Hospital spoilers say that Maxie Jones (Kirsten Storms) will be in the mix with her matchmaking efforts and set up a lot of opportunities, with Dustin’s knowledge but not Lulu’s, for the two to spend time together.

GH Fans have already noticed the onscreen chemistry between Dustin and Lulu and how much fun they have together. Some have already dubbed the couple “Lustin”, which probably does sound better than the alternatives of “Dulu” or “Ludu”! Dustin definitely has the ability to distract Lulu from her pain and grief over her absentee husband Dante Falconeri’s (Dominic Zamprogna) condition and the divorce papers he served her with.

Lulu portrayer Emme Rylan noted in a recent interview that the General Hospital powers that be wanted to leave the door open for Dominic to return to the show if he should ever want to, so therefore no Dante recast, and Lulu needs a life.

It is Maxie’s plan to set up as many opportunities as she can for Dustin and Lulu to be together, and her motivation is to get Lulu’s mind off her divorce, which she really doesn’t want, but is finalized anyway. Lulu will have mixed feelings, realizing she and Dustin are attracted to each other and have lots of fun together but she will still feel some loyalty to Dante for a while and be unsure if getting involved with another man is the right thing to do.

Then there are the kids – Rocco Falconeri (O’Neill Monahan) and Charlotte Cassadine (Scarlett Fernandez) – how would they feel about a new man in Lulu’s life? Charlotte may not have such a problem with it, seeing she lives part time with her birth father Valentin Cassadine (James Patrick Stuart) but Rocco misses Dante terribly and may have problems, thinking his mother is trying to replace his father with Dustin.

However, Dustin is a teacher – and while he doesn’t teach children Rocco’s age, every teacher learns how to deal with their students as part of their education to become a teacher. He should have the skills to deal with younger children, and besides, General Hospital viewers don’t know that much about Dustin yet – he may have younger brothers and sisters Rocco’s and Charlotte’s age.

For now, it looks like Dustin will be the friend to lean on, the person to call for rides, and the third wheel in Maxie and Lulu’s get-togethers. Of course Maxie always seems to get called away from the meeting so she can conveniently leave Dustin and Lulu to finish the meals together! Stay tuned to General Hospital and keep checking General Hospital spoilers frequently for all the latest news, updates and developments.