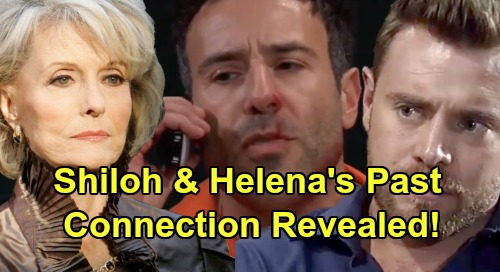 Shiloh Was an Independent Contractor

General Hospital viewers will remember that Shiloh was an independent contractor and a playboy. Could Helena have hired Shiloh to find her a soldier boy candidate? Shiloh had the perfect cover to get close to a Navy SEAL, a perfect choice for what Helena needed. Shiloh is probably the person who put Drew in Faison’s orbit since he needed to get rid of him, but how did Shiloh know about Jason?

Shiloh Has Watched Sam for Years

Sam McCall (Kelly Monaco) was young when she married Shiloh’s father. She’s been in Port Charles for almost 16 years now, so when did Shiloh start stalking Sam? At what point did he begin plotting revenge? Shiloh could have known about Sam and Jason long before 2012. That means he could’ve targeted Jason as well.

Once Shiloh saw Drew in Afghanistan, he certainly could have made sure Helena and Faison got their hands on him. Perhaps Shiloh’s the one who delivered Drew to Faison for the brain mapping. He may have snatched Drew to save himself from exposure as part of this scheme.

Shiloh Could Have Been Helena’s Boy Toy

GH fans will recall that Helena often liked younger men, so Shiloh could’ve been linked to her that way. Shiloh and Helena could have connected in social circles and progressed from there. If so, Shiloh wouldn’t have been the first young lover Helena had and probably wouldn’t have been the last either. Helena had money to keep Shiloh living the high life. Could Shiloh have sacrificed Drew to make his lover happy?

Was the Flash Drive Shiloh’s Idea?

Shiloh needed information from Drew to access his money in Afghanistan. Did Shiloh want the flash drive of Drew’s memories to have access to this info? If Andre Maddox (Anthony Montgomery) knew Drew’s memory would be completely wiped out, was it Andre’s idea to have a baseline memory just in case? There was no guarantee the memory mapping would work, so it was a smart idea.

However, Shiloh may have had concerns of his own since he needed his money. Perhaps both Andre and Shiloh were worried about having those memories for safekeeping. Regardless, Shiloh definitely has a link to Helena, as will be revealed on the GH episode Monday, August 19, and is up to his eyeballs in this brain-mapping saga.