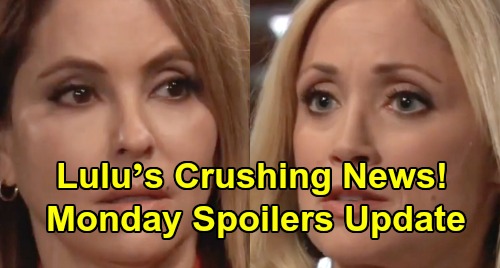 General Hospital (GH) spoilers update for Monday, August 19, tease that Lulu Falconeri (Emme Rylan) will set up an important meeting. Robert Scorpio (Tristan Rogers) and Olivia Falconeri (Lisa LoCicero) will be invited over to Sonny Corinthos’ (Maurice Benard) place. Lulu will want Sonny on hand as well, since this involves Dante Falconeri (Dominic Zamprogna) and the end of their marriage.

As much as Lulu doesn’t want to let go, she knows she must. Dante isn’t coming home, and she’s trying to make peace with that. General Hospital spoilers say Lulu will explain her decision to the others and hope they understand. Dante wants a divorce, and Lulu’s starting to see that it’s the right call.

Sonny will fret over the situation in Monday’s GH episode. He’ll get a pep talk from Robert, who won’t want Sonny blaming himself. Dante was programmed to complete a deadly mission, so it’s not safe for him to be around his loved ones. He feels beyond help and maybe he is. Regardless, Lulu shouldn’t be stuck in limbo and Sonny shouldn’t hold himself responsible for the work of an enemy.

Other General Hospital spoilers say Jason Morgan (Steve Burton) will stop by to see Franco Baldwin (Roger Howarth) in lockup. The mood will be calmer this time as Franco asks how this happened. He’ll marvel at all the memory-mapping madness and get a Helena Cassadine (Constance Towers) explanation from Jason.

Franco will also reflect on his time in Afghanistan and the moments leading up to his capture. He may not recall the exact moment he was scooped up, but he’ll definitely remember his time there. Over with Shiloh Archer (Coby Ryan McLaughlin), he’ll be in an orange jumpsuit as he gets on the phone. Shiloh will promise some interesting info to the person on the other end. That is, of course, if this person can come through for him!

Shiloh doesn’t do anything without expecting something in return, so this will set up an intriguing proposal. He could definitely use some help to get out of his legal jam. GH fans will also see a surprising flashback on Monday. Helena will pop up in this crucial memory, which might explain the information Shiloh has to offer.

Next, Scott Baldwin (Kin Shriner) will be crushed over Franco’s ordeal. Franco now has Drew Cain’s (Billy Miller) memories, so he doesn’t remember Scott at all. The thought of that will hit Scott hard, but he’ll still want to be there for his son. Scott will tell Drew he wants to see Franco, but Drew might advise waiting. Franco has been pushing away anyone connected to this life he doesn’t recall in Port Charles.

Nevertheless, Scott may think he needs to step up for Franco ASAP. If nothing else, he can help Franco out with legal advice. At Elizabeth Baldwin’s (Rebecca Herbst) place, she’ll ask if Hayden Barnes (Rebecca Budig) is certain she wants to move in. Liz will want to be sure Hayden knows what she’s doing. There are three boys in the house, so joining the fam could be an adjustment.

Hayden will want to be there for Liz, Cameron Webber (William Lipton), Jake Webber (Hudson West) and Aiden Webber (Jason David). She’ll feel like they need support right now, so she’ll be glad to provide it. Drew and Curtis Ashford (Donnell Turner) will drop by soon after. They may explain Franco’s recent arrest and comfort Liz as she continues to cope.

Finally, Julian Jerome (William deVry) will hope for a peaceful parting gift. He’ll want to say a proper goodbye to Sam McCall (Kelly Monaco) and work toward making amends. Sam will get updates on Julian and Kim Nero’s (Tamara Braun) decision to move, but it doesn’t look like either of them will really go anywhere. All the Franco drama will bring relationship chaos soon enough.