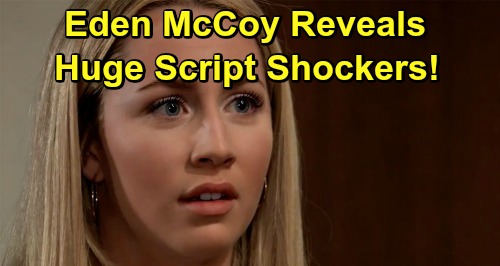 General Hospital (GH) spoilers tease that some crazy drama’s coming up in Port Charles. One ABC soap star offered some hints about what’s ahead in a recent tweet. GH fans know Eden McCoy as the spirited Josslyn Jacks (Eden McCoy), but Joss may lose a little of her usual fire after Oscar Nero’s (Garren Stitt) death. Then again, Joss could go in the opposite direction and go completely off the rails!

Either way, McCoy seems excited about what’s happening down the road. Some storylines besides her own will also be heating up. Let’s look at what McCoy had to say about her latest General Hospital scripts. She had nothing but praise for the writers’ impressive work.

McCoy said, “Reading my scripts for this week and our insanely talented #GH writers are taking us all on the ride of our lives and i am feeling literally every emotion and cannot wait for you to join us #Grateful #CarlysWorld #GHFansRock.” It’s clear that McCoy’s eager to get on set and make some magic happen. GH viewers love watching this cast bring great material to life.

You can bet some big reveals are coming up for May sweeps and beyond. General Hospital spoilers say Jasper “Jax” Jacks (Ingo Rademacher) will be back before you know it. Perhaps he’s part of the wild ride McCoy’s alluding to. There’s a good chance Carly Corinthos (Laura Wright) will face more baby mayhem as well. Despite the kid’s survival so far, there’s no guarantee he or she will make it until birth.

We can’t forget Josslyn’s big brother has a baby of his own to find out about. Michael Corinthos (Chad Duell) may not discover that “Wiley Cooper-Jones” is Jonah Corinthos just yet, but he could at least inch closer to that revelation. Every clue matters at this point, so General Hospital fans will look forward to what’s next.

What kind of drama are you hoping over the next few months? What do you want to see for May sweeps and the summer stories that’ll come afterward? We’ll give you updates as other GH news comes in. Stay tuned to the ABC soap an don’t forget to check CDL often for the latest General Hospital spoilers, updates and news.