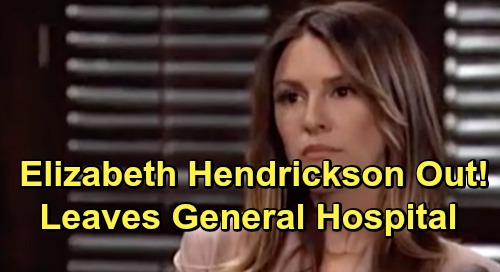 General Hospital (GH) spoilers tease that a crucial character will be leaving Port Charles. GH fans have probably heard by now that The Young and the Restless asked Elizabeth Hendrickson (Margaux Dawson) to make a comeback. Hendrickson plays Chloe Mitchell on Y&R and her character’s necessary for a big story they’ve got going on.

After the news broke, Hendrickson told Soaps in Depth that she’d be pulling double duty. When they put the interview out in Mayb, the plan was to juggle GH and Y&R. “’I’m going to be doing both [shows] this month,” Hendrickson said. “So we’ll see!”

Apparently, that plan didn’t really work. The Young and the Restless may have decided to extend Chloe’s stay, which might’ve made Hendrickson’s continued GH stint impossible. Whatever the case, General Hospital spoilers reveal that Hendrickson is out, so she’ll be departing the role of the no-nonsense DA.

There’s a chance Hendrickson could come back to GH eventually, but there are no guarantees. General Hospital has an easy exit opportunity since there’s dirt on Margaux that could be exposed. She may lose her position and face charges. The show could also recast, but it makes more sense to just bring in a new DA.

If Hendrickson is out for good, she’s just latest GH star that they’ve let Y&R snatch up. Michelle Stafford (Nina Reeves) is already filming back at her old soap home and gearing up for her return as Y&R’s Phyllis Summers. Brytni Sarpy (ex-Valerie Spencer) also scored a contract role on The Young and the Restless. She’s becoming quite the leading lady in a hot love story with a popular character.

However, most General Hospital fans would agree Margaux isn’t some huge loss. She was a hard character to love thanks to her personality – or lack thereof. GH could’ve developed a nice connection between Margaux and Drew Cain (Billy Miller) since the actors were in a successful pairing on Y&R. Unfortunately, General Hospital dropped the ball on that and never gave Margaux much to do.

How do you feel about Elizabeth Hendrickson’s departure as Margaux Dawson? Will you miss her in the role? We’ll give you updates as other GH details emerge. Stay tuned to the ABC soap and don’t forget to check CDL often for the latest General Hospital spoilers, updates and news.