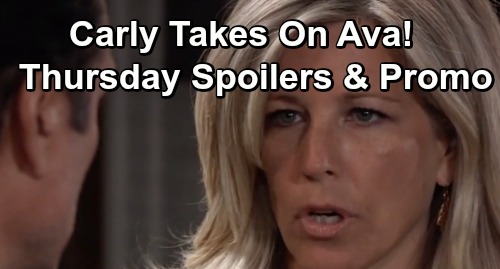 General Hospital (GH) spoilers for Thursday, June 6, tease that Jordan Ashford (Briana Nicole Henry) will want to speak to Stella Henry (Vernee Watson) alone. Jordan may have her doubts about how Stella’s screeching could’ve possibly persuaded Ryan Chamberlain (Jon Lindstrom) to give up his kidney.

Stella will look a bit smug like she’s in on a plan. Was Dr. Kevin Collins (Jon Lindstrom) the one to actually sign the forms? If that’s the case, Stella may not admit anything until the surgery’s over. She probably wouldn’t want Jordan to expose the plot and refuse the kidney.

Then again, Jordan may simply want to address some old issues with Stella. These two haven’t had the greatest relationship, but they’re in a better place these days. Even so, Jordan may want to make sure there’s only love left before she goes under the knife.

Later, Franco Baldwin (Roger Howarth) will point something out in the waiting area. He’ll tell Laura Webber (Genie Francis), Dr. Kevin Collins (Jon Lindstrom) and Dr. Hamilton Finn (Michael Easton) his view on the transplant situation. It seems there may be some complications on Ryan’s end. Franco will suggest that the longer Ryan’s in the OR, the worse things look for Jordan.

Other General Hospital spoilers say Alexis Davis (Nancy Lee Grahn) will pay Julian Jerome (William deVry) a visit. She’ll worry about Shiloh Archer’s (Coby Ryan McLaughlin) threat to “Wiley Cooper-Jones.” Julian will insist that he has a way to keep Shiloh from proving he even has a child. Thanks to Julian’s teamwork with Sam McCall (Kelly Monaco), the paper trail leading to the kid is gone.

Meanwhile, Harmony Miller (Inga Cadranel) will thank Willow Tait (Katelyn MacMullen). She’ll contend that Willow confirmed everything she needed to know. Willow won’t look pleased by that statement. Anything she confirms to Harmony will probably be bogus or completely inadvertent.

Willow doesn’t trust Shiloh, Harmony or any of the other “Dawnies,” so she has no reason to spill anything on purpose. She’s hoping Shiloh will be locked up for his crimes, but she doesn’t want to get her hopes up until it actually happens. GH fans know Shiloh was just arrested, but he’ll trust that Margaux Dawson (Elizabeth Hendrickson) has found a way to vindicate him.

Sonny Corinthos (Maurice Benard) obviously made a risky decision in Wednesday’s episode. After Margaux called for Shiloh’s arrest, Sonny handed over her pledge. He gave up his leverage! What’s to stop Margaux from dropping the charges?

General Hospital spoilers say Margaux won’t be swayed on Thursday, which could mean she’ll support Sonny for now. However, that doesn’t mean Margaux’s loyalty will last – especially if Shiloh’s got another copy of her pledge after all.

Shiloh will also get some great news on Thursday’s episode. Whether that comes from Margaux or Harmony, Shiloh should be feeling optimistic. This storyline will continue throughout the summer, so Shiloh’s exit isn’t imminent. Even if Margaux sticks to her guns, Shiloh will inevitably wiggle out of his jam.

Finally, Carly Corinthos (Laura Wright) will make something clear. She’ll tell Sonny that she’s never run from Ava Jerome (Maura West) before and she’s not going to start now. It sounds like Ava and Carly’s ongoing battle will rev up again, so that should bring some fun scenes.