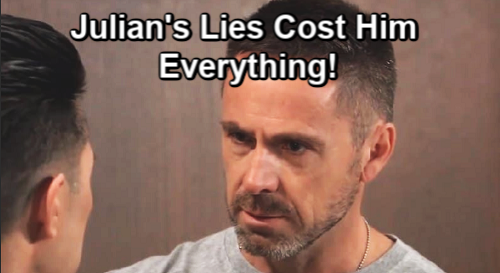 General Hospital (GH) spoilers tease that Julian Jerome (William deVry) is digging a deep hole for himself. It’s one that may be impossible to climb out of! After Brad Cooper (Parry Shen) revealed that he swapped dead Wiley Cooper-Jones with another woman’s child, Julian resolved to keep this secret. He’s been working hard to keep Brad and Lucas Jones’ (Ryan Carnes) family together ever since.

However, new obstacles keep forming and the latest one is Shiloh Archer (Coby Ryan McLaughlin). Julian recruited Sam McCall (Kelly Monaco) to help get rid of the paper trail that could lead Shiloh to “Wiley.” Since there’ll other records through the adoption, Sam warned it wouldn’t be that simple.

This is especially complicated since Julian doesn’t know the whole story. He believes the child came from a homeless woman and knows Shiloh has no rights to him, so he’s still in the dark on Nelle Benson’s (Chloe Lanier) role in all this.

Will Tactics Work On Shiloh Archer?

Julian’s just trying to find a way to keep Shiloh out of the picture without revealing the fact that this isn’t the real Wiley. Of course, Shiloh believes he’s above the law and doesn’t have to answer to anyone. Julian pushed Willow Tait (Katelyn MacMullen) into giving up her rights to her baby, even though the child was dead, and he knew it. Julian may believe the same tactic will work on Shiloh.

Sadly, if Shiloh isn’t swayed by Sonny Corinthos (Maurice Benard), he’s not going to be deterred by Julian. Julian’s bullying techniques will only make Shiloh more determined to get his child away from his adoptive parents. General Hospital spoilers say things could really spiral out of control.

Once Shiloh figures out Wiley is his son, he’s going to want him back no matter what. That could lead to a DNA test that blows this wide open, so what will Julian do before it comes to that? He may have to divulge the truth to Willow and trust that she’ll still want to keep Wiley safe. After all, he is Michael Corinthos’ (Chad Duell) godson and Willow’s been bonding with him.

Willow could always lie that she also had a forgotten random hookup and insist there’s no way of finding the guy. When the paternity test doesn’t match Shiloh, that would back up Willow’s phony story. That might buy Julian more time, but it can’t stop the devastation that’s coming. Sooner or later, GH spoilers say this web of lies will be exposed.

When all is revealed, Julian will try to justify helping Brad as love for his son. Alas, Lucas isn’t going to see it that way. He’ll blast Julian for encouraging this baby switch cover-up instead of pushing Brad to be honest. In Lucas’ eyes, both his father and his husband have committed the ultimate betrayal, and neither will deserve or receive forgiveness.

After Wiley is revealed as Jonah, that’ll really send Lucas over the edge. Julian didn’t know that crucial tidbit, but it won’t matter in the end. General Hospital spoilers say Lucas’ world will fall apart and Julian will once again be cut out of his son’s life – probably for good this time.

Julian can’t blame anyone but himself for what happens with his son; he should have learned that honesty is the best policy when dealing with Lucas! We’ll give you updates as other GH news comes in. Stay tuned to the ABC soap and don’t forget to check CDL often for the latest General Hospital spoilers, updates and news.