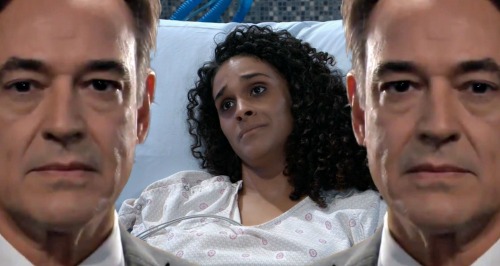 General Hospital (GH) spoilers tease that there could be more to the story of why Ryan Chamberlain (Jon Lindstrom) had a sudden change of heart. He was dead set against donating his kidney to Jordan Ashford (Briana Nicole Henry) unless all the charges against him were dropped. Stella Henry (Vernee Watson) ranted at him for five minutes, and he was suddenly ready to sign away his organ.

Aunt Stella isn’t that scary, so what’s the deal here? What if after Ryan’s seizure, Dr. Kevin Collins (Jon Lindstrom) switched places with him? That would’ve allowed Kevin to sign the papers and donate Ryan’s kidney while his brother was incapacitated. General Hospital spoilers say there are good reasons why that could be the case.

GH fans know Ryan jumped off a bridge in freezing water and cut off his hand to evade the police. He’s not afraid of dying and certainly wouldn’t be bullied into donating anything unless he got something out of it. Jordan is not about to drop the charges against Ryan, so something is certainly off about all this. Was Kevin behind Ryan’s seizure? Did he orchestrate the plan to save Jordan’s life?

Kevin is determined to make amends for everything his brother’s done because he blames himself. The doc was upset when he couldn’t donate a kidney to Jordan and was furious when his brother refused to give up one. Ryan took over Kevin’s life and impersonated him for months, so Kevin might’ve taken a page out of his evil twin’s playbook.

How would Ryan know any different until the surgery was over? They can’t exactly take the kidney away and put it back in him, killing Jordan, because that would be murder, stolen kidney or not. Ryan could be in a medically induced coma for weeks thanks to Dr. Hamilton Finn (Michael Easton) and would be none the wiser that the organ was even donated.

Stella looked at Ryan and promised to speak for him at his trial, which might’ve been a clue. Nothing’s going to help Ryan when his trial happens since he killed 12 people and attempted to kill another. Stella speaking for Ryan wouldn’t really affect his situation.

However, Stella speaking at Kevin’s trial for stealing his brother’s kidney and forging his name is a different story. Kevin could easily claim PTSD since he was held captive, lost his wife, his job, his career, and his health. He surely has grounds for a defense that a social worker, other doctors and the police commissioner could attest to, and the court would probably listen.

Has Kevin outsmarted his brother and saved Jordan’s life? Would the court accept his PTSD defense if he did? Is this just a small payback for what Ryan did to Kevin?