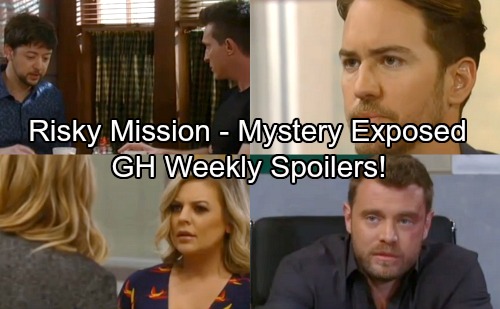 General Hospital (GH) spoilers for the week of April 2-6 tease that some surprises are in store. For starters, Maxie’s (Kristen Storms) reaction will catch Nina (Michelle Stafford) off guard. Ever since Nathan’s (Ryan Paevey) death, Nina has tried to be there for his grieving widow. It’ll all become too much for Maxie, so she’ll try to get Nina off her back.

Naturally, that’ll make Nina even more determined to tear apart Maxie and Peter (Wes Ramsey). She may feel like the Aurora COO is turning Maxie against her. While Nina seeks Curtis’ (Donnell Turner) assistance, Peter will try to get answers. He’ll find himself in a situation that sparks many questions this week.

Will Peter hear about Spinelli’s (Bradford Anderson) plan to pose as Heinrik? General Hospital spoilers say Peter will manage to turn a setback into a major advantage. That could tie in with Spinelli’s attempt to look inside Faison’s (Anders Hove) safe deposit box.

Elsewhere, Griffin (Matt Cohen) will become even more torn about what he’s hiding. He’d love to tell Anna (Finola Hughes) who Heinrik is, but he knows it could put Peter in grave danger. It would also violate his code of ethics, so blabbing could lead to trouble.

Ava (Maura West) will face a dilemma of her own and it’ll involve those test results she put away. General Hospital spoilers say Ava won’t be able to resist temptation. It sounds like Ava may open that envelope and see what she’s been missing. Peter and Faison’s names aren’t on it, but that won’t stop Ava from speculating and causing problems.

Across town, Kiki (Haley Erin) will do whatever she can to make her position clear. Will she go to Dr. Bensch (James DePaiva) and set him straight about boundaries? Could Kiki spill the kiss news to Monica (Leslie Charleson) instead? Kiki could run into some issues if Dr. Bensch denies his sleazy actions.

Over with Bobbie (Jacklyn Zeman) and Carly (Laura Wright), they’ll take a walk down memory lane. They should enjoy some peaceful moments, but things will be quite chaotic for Franco (Roger Howarth). Liz (Rebecca Herbst) and Jake (Hudson West) will land in grave danger, so Jim Harvey (Greg Evigan) could easily be connected to that.

Jason (Steve Burton) will also have some concerns when he gets updates. Some GH shockers are looming! In the meantime, Sam (Kelly Monaco) will do some soul-searching. She’ll tell Drew (Billy Miller) goodbye and head out to contemplate her heart’s desire.

General Hospital fans can expect a great week of episodes. We’ll keep you posted as other GH details emerge. Stick with the ABC soap and don’t forget to check CDL often for the latest General Hospital spoilers, updates and news.