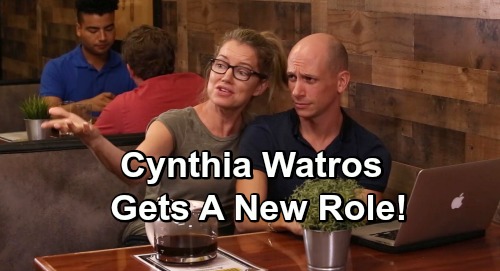 General Hospital (GH) spoilers tease that one ABC soap star has scored a new role. Most GH fans have heard by now that the show recast the part of Nina Reeves (Michelle Stafford). Cynthia Watros will begin filming in early June, so GH will reveal her first airdate once it gets closer. However, it turns out Watros has another exciting side gig that soap fans may be interested in.

Misguided is a daytime digital drama that’s about begin its third season. The first episode of season three will drop on Monday, May 27. Watros will be seen in the role of Anne, who’s a waitress at The Lighthouse Restaurant and Lounge. There’ll be some questions about Anne’s motives, which could be rather wicked once the whole truth’s revealed.

Anne is an homage to the character of Annie Dutton on Guiding Light, which Watros won a Daytime Emmy for playing. She impressed plenty of soap viewers back then, so there’s been lots of buzz about her looming debut on GH. General Hospital spoilers say Watros will take on Nina at a challenging time. Nina is set to find out she’s been betrayed by Valentin Cassadine (James Patrick Stuart) once again.

Although it looks like Sasha Gilmore (Sofia Mattsson) will be exposed as a fraud before Stafford’s time on the air winds down, Watros will inherit the horrific aftermath. Nina will face plenty of heartache and anger, so Watros will have to show us what she’s got right off the bat. Of course, there’s also the little matter of Nina’s real daughter – the one that’s still out there somewhere.

Based on Nina and Willow Tait’s (Katelyn MacMullen) vicious feud, Willow seems poised to be Nina’s bio kid. That should leave Watros with the task of playing Nina’s heartfelt attempts to make amends and win Willow’s approval. Something tells us she’s going to knock it out of the park – at least fans of Annie on Guiding Light think so!

Paul Gosselin, the creator and star of Misguided, was also a big fan of Watros as Annie. That’s why he was thrilled to have Watros on board for season three “Every scene she was in on Guiding Light was a masterclass in acting, so when she agreed to be part of Misguided I was literally brought to tears with excitement,” Gosselin said. “I was brought to tears again when she walked on set.”

Gosselin added that Watros gave him a hug, so it sounds like she’s a real sweetheart behind the scenes. He called it “an honor” to have Watros on Misguided, which means we can probably expect good things from this wonderful actress on GH, too.