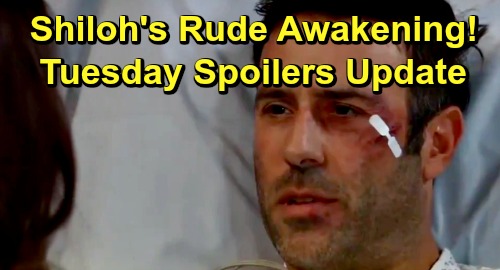 General Hospital (GH) spoilers update for Tuesday, May 28, tease that questions and concerns will swirl around Port Charles. Before we get to all the crazy action, we should mention that Monday’s episode will be preempted. You can catch a repeat if you’d like, but a brand-new GH episode will air on Tuesday.

At Dr. Kim Nero’s (Tamara Braun) place, Julian Jerome (William deVry) will get grilled about what he’s hiding. Kim has been in mourning over Oscar Nero Quartermaine’s (Garren Stitt) death, so she’ll undoubtedly think Julian’s holding back for her sake. She’ll insist that’s not what she wants and lovingly push Julian to confide in her. Kim will want to know if Julian is in trouble.

Julian will probably just brush it off as nothing. He loves and trusts Kim, but revealing that “Wiley Cooper-Jones” isn’t the real Wiley Cooper-Jones would mean taking a huge gamble. The fewer people in the loop, the better off Brad Cooper (Parry Shen) will be.

At GH, Shiloh Archer (Coby Ryan McLaughlin) will be in for a rude awakening. He’ll be pleasantly surprised when Sam McCall (Kelly Monaco) appears at his bedside, but she won’t be there to support this cult leader. Sam will assure Shiloh that the game he’s been playing is over. She’ll snap that Shiloh loses and chew him out right in his hospital room.

Meanwhile, Jason Morgan (Steve Burton) will surprise Monica Quartermaine (Leslie Charleson) with his Shiloh story and contend that he needs proof. Jason will hope for evidence that Sam was drugged by Shiloh, so maybe they’ll go for round two of testing that cup. It never actually got tested last time, so Jason may hope for real results if only Monica knows.

Other General Hospital spoilers say Dr. Neil Byrne (Joe Flanigan) will wonder if the plan succeed. Alexis Davis (Nancy Lee Grahn) won’t be certain until she hears back from Sam. You can bet she won’t be happy when Sam reveals how far she went to take Shiloh down.

Alexis is about to get some bad news from another one of her daughters as well. Kristina Corinthos-Davis (Lexi Ainsworth) will seem tormented, so Neil will suggest she should open up to her mom. He’ll think Kristina needs to come clean about what’s bothering her and let Alexis help her work through it.

Kristina will ultimately admit there’s something about DoD that she hasn’t revealed. She’ll note that the pledge she gave Shiloh wasn’t about Sonny Corinthos (Maurice Benard); it was about Alexis. General Hospital spoilers state that Alexis will be taken aback and hurt by the betrayal.

Next, Ava Jerome (Maura West) will be arrested and hauled off to the PCPD. In the interrogation room, Scott Baldwin (Kin Shriner) will get frustrated with his friend. He’ll give Ava legal advice, but the remorseless backstabber will just want to know if Ryan Chamberlain (Jon Lindstrom) is dead. Scott won’t be sure yet, but he’ll push Ava to plead not guilty or else she could be facing a murder rap.

Back at GH, Ryan will still be alive when they bring him in. He’ll indeed make it to the operating table according to Scott, but there’s no word yet on if he’ll survive. Fortunately, Jordan Ashford (Briana Nicole Henry) will get the surgery and soon be on the road to recovery. She’ll interrogate Curtis Ashford (Donnell Turner) about what she’s missed, so he’ll fill her in on the circumstances of this bizarre transplant.