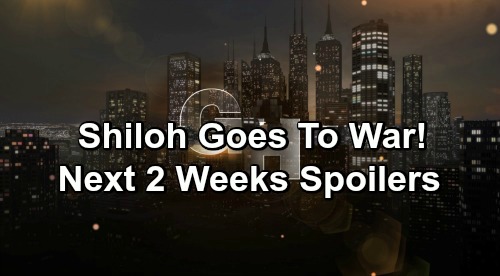 General Hospital (GH) spoilers for the next two weeks tease that we’ll see some sneaky plans and shocking moments. Shiloh Archer (Coby Ryan McLaughlin) will manipulate everyone and everything he can from every angle over new GH episodes from May 28 through June 7. He’ll turn people against each other and make it work to his advantage, so he may convince Margaux Dawson (Elizabeth Hendrickson) that Jason Morgan (Steve Burton) is the real villain here.

Shiloh may find other ways to stir the pot as well. He clearly wasn’t happy about Sonny Corinthos’ (Maurice Benard) recent visit at GH. Sonny warned Shiloh that his staircase tumble was just the beginning. He suggested terrible things would start happening to Shiloh if he didn’t cough up Kristina Corinthos-Davis’ (Lexi Ainsworth) pledge.

However, Shiloh isn’t the kind of guy who backs down from a fight. He may release that pledge soon enough and enjoy watching the chaos unfold. In the meantime, Alexis Davis (Nancy Lee Grahn) will be blindsided by her daughter’s admission. Kristina will confess that Alexis was the subject of her trust offering, which will leave Alexis reeling.

Alexis will be supportive at first. He’ll want Kristina to know everything’s going to be OK, so she’ll show Kristina some love. Later, reality will hit Alexis. She’ll determine that Kristina was angry enough to risk sending her to prison, so that’ll be tough to take. Alexis will certainly worry about the storm that Shiloh may have in store for her, too.

Next, Nina Reeves (Michelle Stafford) will head out for a mother-daughter lunch with Sasha Gilmore (Sofia Mattsson). A stunning blow will strike soon after. Unfortunately, General Hospital spoilers are now shifting away from the fake daughter revelation. It looks like this could involve the fate of Crimson instead.

Drew Cain (Billy Miller) will likely sell Aurora Media before long, so that could bring an uncertain future for Crimson. Jasper “Jax” Jacks (Ingo Rademacher) will probably purchase Aurora, but he may have very different ideas on what’s needed and what’s not. He’ll just want to do what makes sense in terms of the business.

General Hospital spoilers say Nina and Maxie Jones (Kirsten Storms) will band together. They’ll form a new plan as Jax ends up on the hot seat. He’ll have to rush to the defense of his own motives. It sounds like Nina will be busy working to save Crimson, so her impending marriage to Valentin Cassadine (James Patrick Stuart) could get pushed back.

Over with Willow Tait (Katelyn MacMullen), she’ll get grilled by Harmony Miller (Inga Cadranel). Willow will do her best to keep Harmony and especially Shiloh as far away as possible. She won’t want the Dawn of Day gang anywhere near “Wiley Cooper-Jones.”

Meanwhile, Julian Jerome (William deVry) will do something extreme for Brad Cooper (Parry Shen). He’ll be willing to do whatever it takes to protect Brad and Lucas Jones’ (Ryan Carnes) family. Julian will also corner Willow with a warning. He’ll make it clear that the situation is dire and try to figure out a way to keep “Wiley” in “Brucas’” arms. Willow will pitch in on that and hope for the same thing.