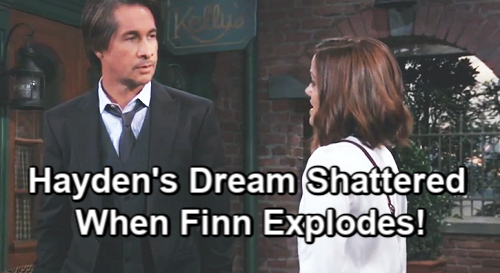 General Hospital (GH) spoilers tease that Hayden Barnes’ (Rebecca Budig) dream reunion will turn into a total nightmare. Hayden’s keeping a huge secret from Hamilton Finn (Michael Easton), but she wishes she could come clean about their daughter. She’s been fantasizing about what it’d be like to tell Finn the truth and move forward as a family, but things won’t be nearly as rosy when it actually happens!

For starters, there’s a good chance the revelation won’t come through a willing confession. It’s doubtful Hayden’s guilty conscience and dreams for the future will be why Finn finds out. It seems more likely that Finn will pick up on more and more clues. He may put them together and follow a trail that leads him to answers.

General Hospital spoilers say Finn will suspect Hayden’s keeping something significant from him. He probably won’t suspect their child survived at first, but he could eventually. Then again, Finn may not get that far.

Hamilton Finn Needs To Pry The Truth From Hayden Barnes

His hunch could simply drive him crazy and convince him that he has to pry the truth out of Hayden. She might be more inclined to confess if Finn’s in her face insisting she has to come out with it.

Regardless, GH viewers can expect a big showdown over this secret. Hayden will ultimately have to admit she lied about losing Finn’s child and robbed him of their little girl’s first milestones. She’ll assure Finn she would’ve told him if he’d met her in Rome, but that’s no excuse. Hayden never should’ve lied to Finn at all – and he’ll be sure to tell her so!

Finn would’ve been a devoted father if he’d had the opportunity. He’s bound to find this whole thing baffling and incredibly hurtful. Finn will surely explode at Hayden for keeping his daughter from him and making him a stranger to her now.

Hayden’s worst fears could come true if Finn turns this into a custody battle and puts their kid at the center of the drama. As for Hayden’s reunion hopes, they’ll be dashed for the time being. Any progress she’s made with Finn will be obliterated in an instant.

The good news is Finn will likely forgive Hayden sooner or later. The bad news is Hayden will have to go through plenty of heartache first. Of course, some might think it serves Hayden right for letting Finn mourn the loss of their baby. She’ll pay the price for that mistake, but “Fayden” fans are counting on everything to work out down the road!