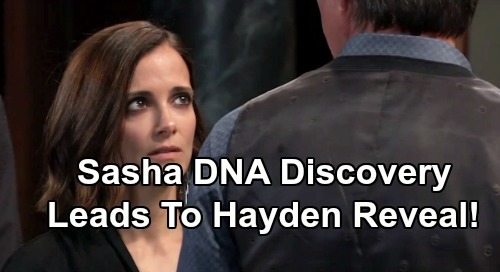 General Hospital (GH) spoilers tease that a moral dilemma may be headed Hamilton Finn’s (Michael Easton) way. He’s a great doctor who always tries to do things by the book, but sometimes there are tricky situations – just like in the case of Jordan Ashford’s (Vinessa Antoine) kidney transplant. This time Finn may be faced with a bomb he could drop or remain silent on.

During the week of August 26-30, Finn will get some test results back – presumably for Sasha Gilmore (Sofia Mattson). General Hospital spoilers say Finn will be shocked and baffled by these results. There’s a good chance this will involve an inconsistency of some sort. Perhaps Finn will realize Sasha couldn’t possible be Nina Reeves’ (Michelle Stafford) biological daughter.

Of course, Finn might think this has Valentin Cassadine (James Patrick Stuart) written all over it. He could confront Valentin and wonder if this DNA discrepancy is his doing. Would Valentin come clean and push Finn to stay quiet for Nina’s sake? He might argue that telling Nina the truth would only hurt her.

GH could tie this in with Anna Devane’s (Finola Hughes) Peter August (Wes Ramsey) predicament since she believes Peter belongs to Alex Devane (Finola Hughes) – although she can’t be sure. Of course, Dr. Arthur Cabot (Time Winters) has offered to reveal which memories were Alex’s if he can cut a deal. General Hospital seems to be reviving that story as Finn’s new one kicks off.

This could also connect to Hayden Barnes’ (Rebecca Budig) situation down the road. Finn always found Hayden easy to talk to, so it’s possible he’ll confide in her. He may admit he’s torn about how much he should reveal to Nina. Finn might argue that deceiving someone about a child is a huge deal.

At the same time, Finn wouldn’t want to destroy Nina’s happy reunion. He could argue that he’d give anything to have the son or daughter he lost with Hayden. This would be an excellent opportunity for Finn to open up and reveal some feelings Hayden didn’t know about. General Hospital spoilers say they could really pile on the guilt here!

Will Finn’s discovery ultimately lead Hayden to reveal the truth about their child? Will Finn keep his mouth shut about Sasha or spill the shocker? We’ll give you updates as other GH news comes in. Stay tuned to the ABC soap and don’t forget to check CDL often for the latest General Hospital spoilers, updates and news.