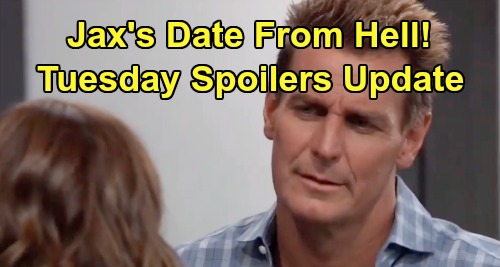 General Hospital (GH) spoilers update for Tuesday, August 20, tease that Shiloh Archer (Coby Ryan McLaughlin) won’t want Franco Baldwin (Roger Howarth) to pass up his chance at answers. He’s desperate to find out where his money was transferred, so he’s hoping Franco will cough up that info. Shiloh has offered the name of Helena Cassadine’s (Constance Towers) accomplice in exchange, but Franco didn’t bite.

Of course, that won’t stop Shiloh from pushing Franco on Tuesday. He’ll insist there’s so much more Franco doesn’t know, but it seems Franco will stand his ground. While Shiloh’s transported to Pentonville, Scott Baldwin (Kin Shriner) will have a trick or two up his sleeve. He’ll have a workaround of some sort that could help Franco, but he’ll expect immediate disapproval.

Franco isn’t acting like himself right now since he has Drew Cain’s (Billy Miller) memories. He’ll undoubtedly object to whatever Scott’s cooked up, so he may have to be convinced. Scott will give Drew and Curtis Ashford (Donnell Turner) updates on his plans, so perhaps they can work together to get Franco on board.

Meanwhile, Monica Quartermaine (Leslie Charleson) will get a visit from Kim Nero (Tamara Braun). General Hospital spoilers say Kim will hand in her notice at GH and explain that she’s leaving Port Charles. Despite her disappointment, Monica should get why Kim wants to make the move. There are just too many Oscar Nero Quartermaine (Garren Stitt) memories haunting her around town.

Next, Sonny Corinthos (Maurice Benard) will reach out to Jason Morgan (Steve Burton) about their latest hire. He’ll want to see if Dev Cerci’s (Ashton Arbab) following orders and staying out of trouble. Jason may admit that’s the case, but he’ll worry things could head downhill quickly. He doesn’t trust Dev and can’t bear the idea of him causing drama for the Corinthos clan.

Over with Carly Corinthos (Laura Wright), she’ll hear Josslyn Jacks’ (Eden McCoy) pitch. Joss will drop a hint about forgetting school altogether, which should leave Carly concerned. It’s possible Dev’s street education mentality has rubbed off on Joss, which could make her want to drop out herself. However, it seems more likely she’ll just want to support Dev’s path for himself.

Dev actually knows a great deal about literature and other subjects most kids would study in school. He’s learned on his own, so Josslyn may think he should keep doing things his way. Naturally, Carly won’t agree with that idea. Sonny and Carly want Dev to get a proper education, so he’ll have to live by their rules. They’ve helped Dev out a lot, so the least he can do is hit the books and head to his classes.

Other General Hospital spoilers say Peter August (Wes Ramsey) will get some troubling news. A phone call will shake him up on Tuesday, so it’ll be interesting to see who it’s from and what it involves. In the meantime, Maxie Jones (Kirsten Storms) will be floored to learn Liesl Obrecht (Kathleen Gati) has a date with Jasper “Jax” Jacks (Ingo Rademacher). She’ll definitely want the scoop on how this came about.

Liesl probably won’t want to divulge that part, so she’ll shift Maxie’s attention elsewhere. Jax deserves to see Liesl looking her best, so she’ll want to get all dolled up for her Aussie hunk. Liesl will seek Maxie’s assistance, which will likely involve her style for the evening.

Finally, the other half of this date will receive word. Hayden Barnes (Rebecca Budig) will admit she got busted by Liesl at Wyndemere, so that brought desperation. Promising this dinner was a fast way to get Liesl off Hayden’s back. Jax won’t be pleased by the complication, but he can certainly turn on the charm and make sure Liesl remains on their side.

General Hospital fans won’t want to miss all the shockers ahead. We’ll keep you posted as other GH details emerge. Stick with the ABC soap and don’t forget to check CDL often for the latest General Hospital spoilers, updates and news.