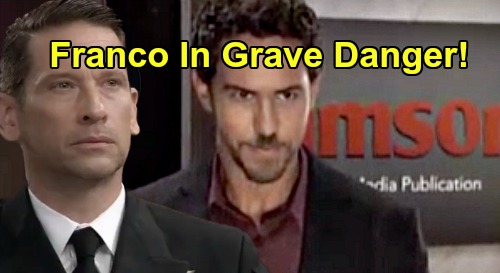 General Hospital (GH) spoilers tease that “Drew Cain” aka Franco Baldwin (Roger Howarth) will continue to struggle. He desperately wanted the freedom to remain “Drew,” but he’s starting to see how much damage this is doing. That goes for Franco’s loved ones as well Kim Nero (Tamara Braun). “Drew” once thought this was as simple as remaining his true self, but that true self isn’t feeling so true anymore.

The hearing changed “Drew’s” view of the situation in many ways. He saw first-hand how hard Scott Baldwin (Kin Shriner), Elizabeth Baldwin (Rebecca Herbst) and Cameron Webber (William Lipton) were willing to fight for Franco. “Drew’s” relationship with Kim was also affected by her courtroom shocker. Drugging the real Drew and trying to force him into baby-making just isn’t stable behavior. He’s pumping the brakes now since he knows how serious Kim’s issues are. It’s time for her to focus on healing.

It’s also time for “Drew” himself to do some soul-searching. He’s been clinging to a past that isn’t really his own. That’s something “Drew” will have to come to grips with in the episodes ahead. General Hospital fans know “Drew” is now willing to stick around Port Charles for a while. Liz insisted “Drew” should come say goodbye to the family, but he may reveal that he’s staying instead – at least for now.

Liz, Cameron, Aiden Webber (Jason David) and Jake Webber (Hudson West) all miss Franco. Their deep pain is a great reason for “Drew” to have a change of heart. It might even be interesting if “Drew” made a connection to his former Franco self. Could “Drew” try painting and realize he still has a knack for it, even without Franco’s memories? That could be a good catalyst for pushing “Drew” into this memory procedure.

Once “Drew” was faced with his own art in front of him, he could realize he’s Franco deep down. “Drew” is living a lie; Franco is his truth. Even if it’s just “Friz” family guilt driving this decision, The Bold and the Beautiful spoilers say it seems likely that Franco will sign on for this memory reversal voluntarily. That should thrill Liz…and terrify her. Although Liz wants Franco back, GH viewers can’t forget there are other less pleasant possible outcomes.

After all, it’d be a bit too easy if Franco just had the procedure done and became Franco again. He obviously won’t be stuck in a vegetative state either, so that option’s out. No change in Franco’s memories would be rather anticlimactic. With all that in mind, that leaves us with the strangest outcome: Franco’s Drew memories intensify.

GH buzz hints that here’s where the Peter August (Wes Ramsey) drama should come into play. On November 5, Liz will get some awful news. Will she learn “Drew” only remembered more “Drew” details after his procedure? Will Liz find out Franco didn’t return? It’s a good possibility since he’ll have a shocking realization that same day. “Drew” may recover memories that point to Peter’s dark secrets.

General Hospital spoilers say Franco will be in grave danger as Thanksgiving approaches – and it might involve more than a risky procedure. Peter may realize the jig could be up unless he takes “Drew” down. Naturally, Franco’s true memories will inevitably still come back. Love is a powerful thing, so we have faith that Liz can make it happen.

Keeping Franco alive has to be the priority though, so don’t miss all the action! We’ll give you updates as other GH details emerge. Stay tuned to the ABC soap and be sure to check CDL often for the latest General Hospital spoilers, updates and news.