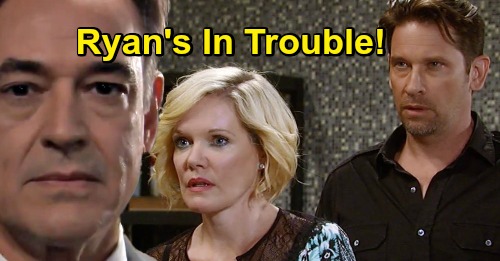 General Hospital (GH) spoilers tease that Franco Baldwin (Roger Howarth) will battle some anxiety. He may be a bundle of nerves due to all the drama Elizabeth Webber (Rebecca Herbst) and her boys are facing. Cameron Webber (William Lipton) always finds himself on the wrong side of the law and poor Aiden Webber’s (Jason David) been tormented relentlessly at school.

Things have been quiet when it comes to Jake Webber (Hudson West), but they have to worry about him, too. After all, he could feel left out if Liz and Franco spend all their time focusing on the other two. However, there could be another reason for Franco’s uneasiness. Losing Kiki Jerome (Hayley Erin) was a tough blow, so she’s undoubtedly been on his mind lately.

Franco may hate the idea of another life being taken by Kiki’s killer. He might decide that stopping this vicious murderer would be what she wanted him to do. Of course, Franco may be craving revenge as well. He’ll be feeling a lot of emotions and they’ll all need somewhere to go. Franco might channel them into a mission to get true vengeance.

On January 11, General Hospital spoilers say Franco will shock Ava Jerome (Maura West). Will he share a vengeful plan with her? Franco might pay Ava a visit to check on her and unleash some of his anger. Franco served as a father figure for Kiki, so it’ll be like her parents coming together in rage.

Ava could be on board for teaming up here. It’d be fun to see Ava and Franco plot a killer takedown by joining forces. That could also complicate the situation for Ryan. He might grow jealous, especially if Franco’s able to pull out a darker side of Ava. GH fans know Ryan likes to be the one to do that.

Plus, Ryan obviously won’t like the task at hand. If they catch him, all his Port Charles mayhem will come to an end. General Hospital spoilers say Kiki’s murder could end up costing Ryan more than he bargained for. Even if Franco’s anger dies down, Ava’s fury most certainly will not! She’ll never give up on trying to avenge her daughter’s death.

It sounds like Ryan will have to be careful and make some adjustments. We’ll give you updates as other GH news comes in. Stay tuned to the ABC soap and don’t forget to check CDL often for the latest General Hospital spoilers, updates and news.