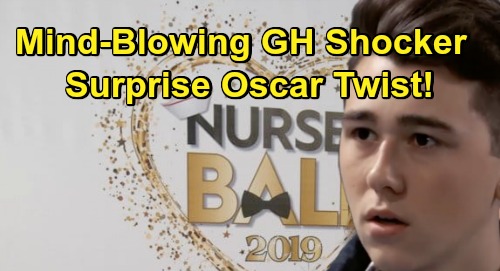 General Hospital (GH) spoilers tease that the Nurses Ball fun is just getting started. After several somber episodes surrounding Oscar Nero Quartermaine’s (Garren Stitt) death, GH fans were ready for some happiness and excitement. The first part of the Nurses Ball never brings much drama, but it delivers something light and entertaining – just what the doctor ordered after Oscar’s brutal passing.

The fun will continue with several great performances, but it looks like one of those could lead to some bittersweet moments. George Pennacchio from ABC7 in Hollywood spoke with several cast members as well as GH’s executive producer, Frank Valentini. They all offered some nice comments and hints, but Valentini’s clue is the most interesting.

There’s no confirmation on this yet, but we can speculate on what Valentini’s hinting at. Josslyn Jacks (Eden McCoy) is currently quite distraught over Oscar’s death. She opted not to attend the Nurses Ball with Carly Corinthos (Laura Wright) and Sonny Corinthos (Maurice Benard), but we know she’ll be there. That’s because a GH promo showed a rack with the name “Josslyn” above her gown!

Plus, we’ve got some General Hospital spoilers regarding Joss for the week ahead. She’ll receive a note that lifts her spirits before she prepares to make a splash. This could be the Nurses Ball performance everyone will be talking about.

Joss knew Oscar wouldn’t live to see the Nurses Ball, but they liked talking about the idea anyway. It gave them some hope to work on this song in Oscar’s final weeks. Oscar even recruited Ned Quartermaine (Wally Kurth) to help him finish the song before his passing. He knew how important it was to Josslyn, and he wanted to leave a piece of himself behind.

Oscar also made a video that we still haven’t seen yet, so it’s possible that’ll be worked in the story here. Could Josslyn and Oscar do their duet after all? If Oscar sang on that video, it could happen. That would be a fitting way to make Oscar’s dream come true, even if he’s no longer alive to see it.

Naturally, the last half of the Nurses Ball will bring more explosive material. Lynn Herring (Lucy Coe) offered some clues about in this interview. “There’s about 50 percent chaos toward the end so people have to stay ’til the end because it’s wild,” Herring said. We’re willing to bet Ryan Chamberlain (Jon Lindstrom) will be the cause of that chaos, so that’ll definitely be worth tuning in for.