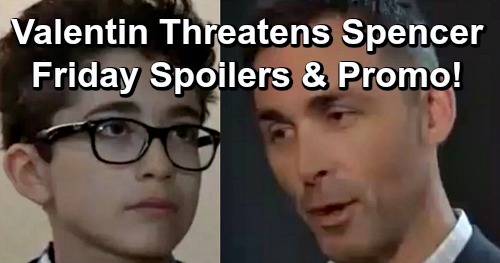 General Hospital (GH) spoilers for Friday, April 12, tease that Anna Devane (Finola Hughes) will continue to wrestle with fears about Robin Scorpio-Drake (Kimberly McCullough). She can’t be certain she’s truly Robin’s mother, so she’ll talk to Robert Scorpio (Tristan Rogers) about her concerns. Anna will just need to open up and try to work through everything she’s feeling.

Robert will insist that’s crazy talk and urge Anna to put the thought out of her head. He’ll assure Anna that she’s indeed Robin’s mom biologically and in every other way as well. Robert will have total confidence, but Anna will continue to battle worries. However, it’s likely Peter August (Wes Ramsey) that she didn’t give birth to. That revelation should be something that hits Anna eventually.

Jordan was awfully weak after her latest round of dialysis. Curtis can see that she’s struggling, so he’ll confide in Nina and hope a kidney becomes available in the near future.

Over with Valentin Cassadine (James Patrick Stuart), he’ll face off with Spencer Cassadine (Nicolas Bechtel). Valentin will warn Spencer that the truth always comes out in the end. He’ll be referring to the election Spencer tampered with, but Valentin really needs to focus on his own mountain of lies!

General Hospital fans know Valentin keeps piling on the deception when it comes to Nina and her fake daughter.

The Sasha Gilmore (Sofia Mattsson) bomb has to drop at some point, but Valentin will manage to keep a lid on it for now. At the courthouse, Nora Buchanan (Hillary B. Smith) will assure Dr. Kevin Collins (Jon Lindstrom) that guilt and responsibility are two different concepts.

She won’t think Kevin should go down for enabling Ryan Chamberlain (Jon Lindstrom), who was the real villain in this story.

Speaking of Ryan, Ava Jerome (Maura West) will talk to Jordan about him on Friday. She’ll want to know if there are any updates on the case. Ava will ask if Jordan thinks Ryan is dead, so the commissioner may admit she doesn’t.

According to the forensics team, Ryan’s hand was indeed severed when he was alive. Jordan has tasked Curtis with digging around, so Ava may pester him next.

Margaux Dawson (Elizabeth Hendrickson) will be out of the loop on Curtis’ investigation and perhaps some courtroom shockers, too. She’ll try to figure out what’s going on in Friday’s GH episode, so expect one of her typical outbursts.

Meanwhile, Laura Webber (Genie Francis) will discuss Ryan with Finn. She’ll be curious if the doc thinks Ryan could be alive and coming back for vengeance.

General Hospital spoilers say all this Ryan buzz is building to something big. It sounds like a major Ryan showdown is brewing, so let’s hope Ava gets her chance to finish him off! We’ll keep you posted as other GH news comes in. Stay tuned to the ABC soap and don’t forget to check CDL often for the latest General Hospital spoilers, updates and news.