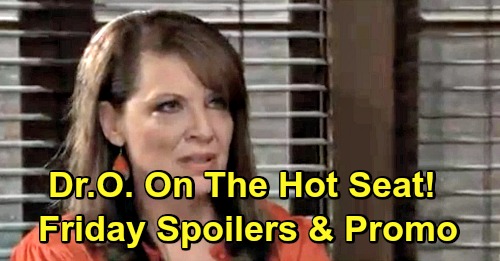 General Hospital (GH) spoilers for Friday, April 19, tease that Michael Corinthos (Chad Duell) will turn on the charm. He’ll bump into Sasha Gilmore (Sofia Mattsson) during his work-out session, so he’ll use this opportunity to his advantage. It looks like Sasha will get a minor sprain, but Michael will make that work in his favor, too. He’ll help Sasha ice down her wrist, so that’ll bring some close moments.

Michael will ultimately take a chance and remind Sasha of his interest in her. He’ll wonder if it’s possible that she likes him as well, so she’ll confess that’s true. However, Sasha may allude to some complications that could get in their way. She’ll try to resist Michael’s advances, but he won’t see any reason why they shouldn’t go on a date. In fact, a kiss should be coming up soon.

It seems Laura may hear something about that and mention it during this chat. Liz will realize Franco must’ve had a hand with this. She may not think it’ll work, but she should be proud of her hubby for caring enough to try. Next, Jordan Ashford (Briana Nicole Henry) will track down Franco. She’ll have a few questions for him, so he’ll ask if he’s under investigation.

Jordan will probably assure Franco that he’s in the clear and won’t be asked to risk everything again. Nevertheless, Jordan will still want to touch base and potentially talk about some Ryan Chamberlain (Jon Lindstrom) details. Curtis Ashford (Donnell Turner) will also speak with Jordan on Friday. They’ll determine that their best strategy for finding Ryan is to find the person who helped him survive.

Other General Hospital spoilers say Ava Jerome (Maura West) will get a surprise. She’ll discover that someone’s been following her, so she’ll wonder how long this has been going on. Since we know Ava will chat with Scott Baldwin (Kin Shriner) on Friday, maybe it’s him. It makes sense for Scott to have been keeping tabs on Ava out of concern.

Ava will undoubtedly point out that she doesn’t need a babysitter, but she could use a fake boyfriend. GH spoilers state that Ava will seek Scott’s help, so perhaps he’ll get that unusual request. Unfortunately, it doesn’t look like Scott will be very receptive to it. Ava may need another option, but she definitely won’t give up.

Meanwhile, Nina will mention Liesl Obrecht’s (Kathleen Gati) leverage to Valentin Cassadine (James Patrick Stuart) – or at least what she believes is Liesl’s leverage. Valentin lied to Nina, so she thinks Liesl’s holding the Cassandra Pierce (Jessica Tuck) story over him. Nina will fret about her aunt keeping a secret that could destroy them, but Valentin will downplay the drama.

Peter August (Wes Ramsey) and Maxie Jones (Kirsten Storms) will also have the big secret on their minds. They’ll confront Liesl about the dirt she’s got on Valentin, but Liesl will surely stay tight-lipped. She doesn’t want to hurt Nina or give up the good thing she’s got going.