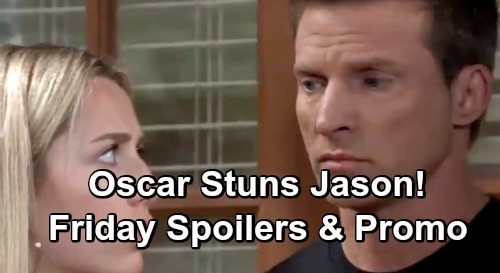 General Hospital (GH) spoilers for Friday, April 26, tease that Lulu Falconeri (Emme Rylan) will have a surprise for Peter August (Wes Ramsey). She’ll reveal that she’s back in town to stay and has big plans. Perhaps Lulu’s been working on that book Peter suggested. Regardless, she’ll probably grill Peter about how things are going with Maxie Jones (Kirsten Storms) so far.

Meanwhile, Maxie will be looking through the racks at Crimson. It appears she’ll have trouble settling on something to wear, so Nina Reeves (Michelle Stafford) will argue that it’s a sign. She’ll think Maxie should rethink her date, but Maxie won’t agree. General Hospital spoilers say Maxie will eventually find the perfect outfit for her lovely night with Peter.

Over with Anna Devane (Finola Hughes), she’ll wonder why Robert Scorpio (Tristan Rogers) keeps giving Dr. Finn Hamilton (Michael Easton) such a hard time. However, Robert understands that Finn matters to Anna. Even though Robert can be cranky and pushy sometimes, he just wants Anna to be happy.

At GH, Sasha Gilmore (Sofia Mattsson) will seem a bit weak as she lies back in an exam room. Michael Corinthos (Chad Duell) will approach the door, so Sasha will flash a smile. She’ll point out that she told Michael she was no good for him. A fainting spell or another minor medical crisis may cause a scare, so that should be why Sasha’s cracking a joke.

Next, Sonny Corinthos (Maurice Benard) will try to keep Carly Corinthos’ (Laura Wright) mind off all her baby fears. They’ll have some fun with Avery Corinthos (Ava and Grace Scarola), who will be rather inquisitive. Carly will note that Avery asked a question and deserves an answer. Once Sonny’s put on the spot, he’ll laugh and tackle whatever it is Avery wants to know.

It sounds like Sonny and Carly will indeed enjoy a nice distraction, so that’s great news for “CarSon.” Just outside the Quartermaine mansion, Oscar Nero (Garren Stitt) will insist that he wants to speak to Jason Morgan (Steve Burton) alone. He’ll push Drew Cain (Billy Miller) and Josslyn Jacks (Eden McCoy) to leave so he can deliver a request.

Of course, GH’s weekly preview video also shows Oscar asking Jason and Drew for a favor. He’ll want them to try being real brothers for a change, so we’ll see if that’s something they can do. Before Friday’s episode wraps up, Oscar will also speak with Cameron Webber (William Lipton). He’ll push Cam to help him out, so this may involve being there for Joss once he passes away.