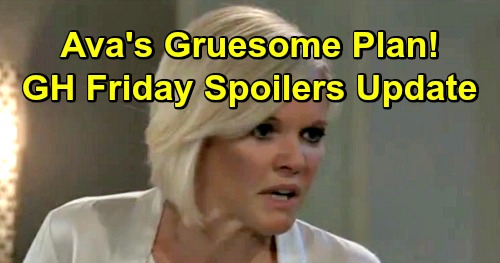 General Hospital (GH) spoilers for Friday, April 5, tease that Peter August (Wes Ramsey) will have a conversation with Chet Driscoll (Chris Van Etten). The topic of Maxie Jones’ (Kirsten Storms) love life will come up, so Chet will wonder if Peter has a grip on the situation. He’ll fish for hints that Maxie might be ready to date.

Peter has been bonding with Maxie for a while now, so he may worry about having a romantic rival. However, he’d certainly respect Maxie’s wishes. The trouble is that Maxie doesn’t seem to know what her wishes are! During a chat with Anna Devane (Finola Hughes), Maxie will be asked what her deal with Peter is. Anna will want to know if they’re getting together or not, but Maxie doesn’t know herself.

Maxie has a great vibe with Chet and has gotten to know Peter as well, but is she prepared to take the next step with one of them? Losing Nathan West (Ryan Paevey) was a terrible blow, so moving on has been and will continue to be a challenge. That’s why Anna will work this from another angle. She’ll give Peter some helpful guidance and hope it’ll pay off.

Elsewhere, Dr. Hamilton Finn (Michael Easton) will be ready to move forward. He’s gearing up for a bold move, so is he about to pop the question? A proposal would prove to Anna that he’s all in and prepared for whatever life throws at them.

Other General Hospital spoilers say Willow Tait (Katelyn MacMullen) will face backlash from Nina Reeves (Michelle Stafford). After Willow decided to resign, she really let Nina have it. Willow made it clear that Nina wasn’t a good stepmom and was pretty much the reason for Charlotte Cassadine’s (Scarlett Fernandez) problems. Now it’s Nina’s turn to get some payback.

Since Willow no longer plans to leave the elementary school on her own, Nina will hope to force her out. She’ll head down there with Valentin Cassadine (James Patrick Stuart) and demand Willow’s firing. Thankfully, Willow should be able to smooth things over. She may just have to apologize to Nina and promise to avoid berating parental figures in the future.

Over with Dr. Kevin Collins (Jon Lindstrom), it looks like he’ll get an offer from Lucy Coe (Lynn Herring). Kevin recently let Lucy know that he was still in love with Laura Webber (Genie Francis). He didn’t want Lucy to get her hopes up about reuniting with him, but it’s probably a little late for that. Lucy seemed blue at the time, but she may not give up hope entirely.

In Friday’s GH episode, Lucy notes that she could give Kevin a very warm welcome. This may involve an invitation to stay at her place, but will Kevin actually move into dangerous territory? A hotel would be better if Kevin truly wants to maintain boundaries, but Lucy can be pretty relentless.

Meanwhile, Lulu Falconeri (Emme Rylan) will decide he next move. Laura Webber (Genie Francis) pointed out that her daughter could leave Port Charles, but Lulu will object to that idea. She’d like to get away from the dark pit her home’s become without Dante Falconeri (Dominic Zamprogna), but she won’t want to leave Laura. Lulu will think she needs to stick around and take care of her mom.

Laura will promise she’s more than capable of doing that on her own, but Lulu could still be wary of ditching her. Regardless, Lulu won’t be moving permanently or going off on any extended vacations. There’s a chance she’ll recharge with a getaway, but Lulu’s roots will definitely remain in Port Charles.

At Ava Jerome’s (Maura West) penthouse, she’ll have another outburst involving Ryan Chamberlain (Jon Lindstrom). Ava will once again insist she wants Ryan to be alive so she can kill him. Julian Jerome (William deVry) will listen to Ava’s passionate declaration and try to calm her down if possible. That’s never an easy task when you’re dealing with Ava!

Jordan Ashford (Briana Nicole Henry) popped in with updates on Ryan being found, but things probably aren’t quite as they seem. Even if there’s evidence that suggests Ryan is dead, soaps are known for all sorts of dirty tricks. Ava will still want her shot at deadly vengeance, so let’s hope she gets it.