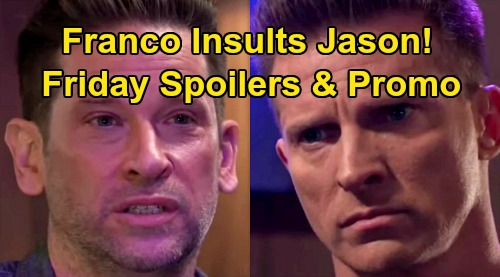 General Hospital (GH) spoilers for Friday, August 16, tease that Harrison Chase (Josh Swickard) will want to clear the air. He’ll reflect on Willow Tait’s (Katelyn MacMullen) recent freak-out at GH, where she briefly thought Chase might be injured. Lulu Falconeri (Emme Rylan) just wanted to give Willow a heads-up on what to expect while dating a cop, but it really spooked Willow – and Chase can tell.

It looks like there may be some other incident on Friday that concerns Will once again. She’ll see a new side of Chase and perhaps grow worried about what the future holds. Chase will wonder if his job is going to be too much for Willow, but she’ll undoubtedly reassure him. They’re in too deep now to walk away from each other, and Willow wouldn’t want Chase to give up the detective work he loves.

However, Willow will continue to fret, so this should be building to something dangerous eventually. In the meantime, Hamilton Finn (Michael Easton) will tell Hayden Barnes (Rebecca Budig) she may have been exposed to a serious contagion. He’ll rattle Hayden with the details while Drew Cain (Billy Miller) seeks out Monica Quartermaine (Leslie Charleson). Drew will want to steal Monica away for a talk.

Naturally, we all know what Drew and Monica need to discuss! He’ll fill Monica in on the memory-mapping chaos and explain why Franco Baldwin (Roger Howarth) now views himself as Drew. Over with Elizabeth Webber (Rebecca Herbst), she’ll remain heartbroken over the whole situation. Nevertheless, it seems Liz will try to downplay her sorrow as well as Franco’s predicament.

Liz won’t want Cameron Webber (William Lipton) to feel any worse than he already does. This certainly isn’t Cam’s fault, but he feels guilty for Franco’s predicament anyway. General Hospital spoilers say Cameron will remind Liz that he was there and knows how bad this is. Cameron will do his best to comfort Liz, but it sounds like he’ll need some comfort himself. At least they can help each other!

Other General Hospital spoilers say Sam McCall (Kelly Monaco) will have bad news for Carly Corinthos (Laura Wright) and Sonny Corinthos (Maurice Benard). Sam will likely be the one to bring “CarSon” in the loop on the memory mayhem. Sonny and Carly should be floored when they hear Drew’s memories were given to Franco. They’ll have plenty of questions, so Sam will answer based on what she knows.

Next, Franco will push Jason Morgan’s (Steve Burton) buttons. He’ll call him Jason Quartermaine, the rich kid with his face. Franco will be pretty obnoxious in Friday’s episode, so Jason won’t like Franco’s Drew any better than he likes Franco. He’ll feel familiar rage bubbling up inside.

Even so, Jason will try to offer a deeper explanation of what Franco’s up against. He may also grill Franco about Shiloh Archer (Coby Ryan McLaughlin) and his past connection to Drew. Finally, Josslyn Jacks (Eden McCoy) will come through for Dev Cerci (Ashton Arbab). She’ll help Dev get ready for his new classes and maybe do a little bonding with him in the process.