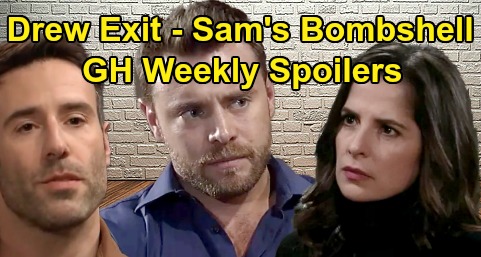 General Hospital (GH) spoilers for the week of August 19-23 tease that some surprises are in store. First, Sam McCall (Kelly Monaco) will get a visit from Julian Jerome (William deVry). He’ll reach out in hopes of making true peace before he leaves town with Kim Nero (Tamara Braun). As for Alexis Davis (Nancy Lee Grahn), her mind will drift to he past. Perhaps some “Julexis” flashbacks are coming up.

Meanwhile, Jason Morgan (Steve Burton) will track down Franco Baldwin (Roger Howarth), who only remembers being Drew Cain (Billy Miller). That conversation should bring some tense and interesting moments! Next, Kim will talk to Monica Quartermaine (Leslie Charleson) – presumably about leaving her job at GH. They’ll have a nice heart-to-heart as Kim prepares for a new chapter.

However, Kim will find herself drawn to her history soon enough. It looks like Kim may have a chat with Franco and perhaps gain some insight into how Drew felt years ago. Kim will take comfort in what she learns. Could she decide to stick around Port Charles and learn even more? Franco-Drew will likely hope Kim stays in PC so he has a chance to win her over.

Over with Lulu Falconeri (Emme Rylan), she’ll issue an invitation. Lulu will head over to Sonny Corithos’ (Maurice Benard) place, and she’ll want Robert Scorpio (Tristan Rogers) and Olivia Quartermaine (Lisa LoCiero) there, too. GH fans know Lulu recently decided to leave the ball in Dante Falconeri’s (Dominic Zamprogna) court when it comes to their marriage. She doesn’t intend to fight him on the divorce.

Lulu’s little meeting may have something to do with Dante, so we’ll see how everybody feels. In the meantime, Josslyn Jacks (Eden McCoy) will have a pitch to make. She’ll try to sell Carly Corinthos (Laura Wright) on an idea, so what’s this about? It’s possible it’ll involve baby names or some project to prepare for her sibling.

On the other hand, Josslyn might have something involving Dev Cerci (Ashton Arbab) in mind. General Hospital spoilers say Joss will grow closer to him before long. As for Cameron Webber (William Lipton), it seems he may land in trouble. Drew will rush to locate Cameron, so he may fear Cam’s stuck in drama again or will perhaps cause more of it himself.

General Hospital spoilers state that Shiloh Archer (Coby Ryan McLaughlin) will want to make an exchange in the week ahead. Will that involve a trade with someone in prison or a deal following an escape? Regardless, Drew could get mixed up in another round of Shiloh mayhem eventually.

Back with Cameron, it appears he’ll be just fine despite Drew’s concerns. Cameron will get a jolt of enthusiasm thanks to Trina Robinson (Sydney Mikayla), so some intriguing plans may be brewing. A problem will strike Sonny’s warehouse in the week ahead as well. Will Drew walk straight into a trap? Sam also has a disturbing email headed her way, so that may tie in with Miller’s exit as Drew.

It sounds like Billy Miller may indeed wraps things up and exit during the week of August 19-23, so stay tuned. We’ll give you updates as other GH news comes in. Stick with the ABC soap and don’t forget to check CDL often for the latest General Hospital spoilers, updates and news.