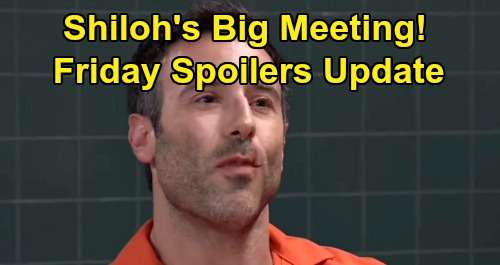 General Hospital (GH) spoilers update for Friday, August 30, tease that Elizabeth Baldwin (Rebecca Herbst) will refuse to give up on Franco Baldwin (Roger Howarth). She loves Franco with all her heart, so she’s counting on a solution to this horrible problem. Unfortunately, that solution may be a risky one. If they can even get Franco to consent to the memory-mapping reversal, there’s always the possibility it could do more harm than good.

Scott Baldwin (Kin Shriner) may bring that up to Liz in Friday’s episode. He’ll express his concerns, but Liz won’t be in the mood for this negativity. She’ll insist that this is the only way for Scott to get his son back. Meanwhile, Kim Nero (Tamara Braun) will have Oscar Nero Quartermaine (Garren Stitt) on her mind – among other things of course. All this Drew Cain (Billy Miller) memory drama has really shaken her up.

Kim will try to find peace in Oscar’s meadow, where Franco will show up to see her. General Hospital spoilers say Cameron Webber (William Lipton) will spot them kissing and blow his top. He’ll be prepared to march over and lash out at them, but somebody will stop him in his tracks. Will it be Jason Morgan (Steve Burton)? Time will tell, but Jason will definitely give Franco an earful on Friday.

Liz and her boys mean a lot to Jason, so he’ll refuse to let Franco cause them pain. While Jason threatens Franco, Mac Scorpio (John J. York) will have big news for Felicia Scorpio (Kristina Wagner). He’ll admit he was offered the Chief of Detectives position by Jordan Ashford (Briana Nicole Henry).

Mac will wonder how Felicia would feel about him taking on a permanent role at the PCPD. Felicia’s usually a supportive gal, so she should get behind this as long as it’s what Mac wants. Afterward, Felicia and Mac will be on babysitting duty. They’ll take care of James West so Maxie Jones (Kirsten Storms) can enjoy a steamy evening alone with Peter August (Wes Ramsey).

Maxie and Peter will have a hotel room to themselves, but Peter won’t be able to concentrate on the task at hand. They’ll be in bed when Peter blurts out that he’s responsible. He’ll admit he’s at fault for everything that happened to Drew and Jason. Maxie will look confused since she doesn’t know anything about Peter’s link to Helena Cassadine (Constance Towers). She may think Peter’s beating himself up over a more minor part in the ordeal.

There’s a good chance Peter won’t actually come clean to Maxie. That would shut down this story far too quickly. Instead, Peter may shift gears and leave out some crucial pieces of the puzzle. At Charlie’s Pub, Ava Jerome (Maura West) will show Julian Jerome (William deVry) a letter she received from Pentonville. Naturally, Ryan Chamberlain (Jon Lindstrom) will be the writer of this passionate note.

Ava will convey the contents to Julian and perhaps leave him worried about what’s ahead. He’ll be glad Ryan is locked up tight, but can those prison walls really hold him? Ryan indicated that they couldn’t, so we have to believe he’s right. That seemed like a huge hint about his getaway early on. Ryan may have big plans to break out and kidnap or kill Ava soon.

Other GH spoilers say Shiloh Archer (Coby Ryan McLaughlin) will greet exactly the woman he wants to see. He’ll seem awfully chipper, so he may think things are looking up due to his grip on Peter. Shiloh also has high hopes for those ELQ shares, which he mentioned to Nelle Benson (Chloe Lanier). He might chat with Nelle on Friday or it could be another female that Shiloh pesters for help.

Over with Kristina Corinthos-Davis (Lexi Ainsworth), she’ll talk to Sam McCall (Kelly Monaco) at the Metro Court. Kristina will suggest that the timing is too perfect as Sam looks as a tad uncomfortable. She may be on the receiving end of Kristina’s usual romantic teasing. She likes to torment her older sis, but she’s truly glad Sam and Jason are so happy.

Then again, Kristina may have another topic she’s pondering. Whatever the case, the conversation could take a serious turn if Shiloh comes up. Sam and Kristina will remain thrilled that Shiloh’s paying the price, but his luck should turn around before long. It won’t be a long-term victory, but Shiloh could wreak plenty of short-term havoc.