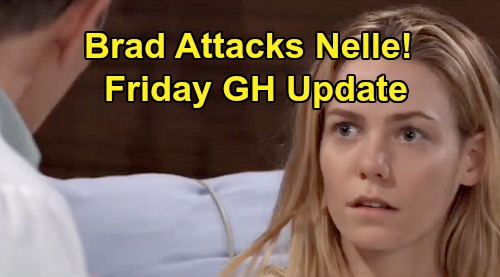 Lucas Jones (Ryan Carnes) is still in a coma, so Brad will feel like his world’s falling apart. He’ll end up taking it out on Nelle for even approaching him about the baby swap. General Hospital spoilers say Brad will fly into a rage and insist this is all Nelle’s fault. Nelle’s eyes will widen as this attack exposes a new side of Brad to her, but she’ll probably give as good as she gets.

Although Nelle was the one who pushed for the switch, Brad made a choice that night. He robbed Michael Corinthos (Chad Duell) of his son just as much as Nelle did. Nelle may remind Brad of that and perhaps warn him about crossing her. GH fans know Nelle can be pretty vengeful, so Brad had better be careful here.

In Lucas’ room, Julian Jerome (William deVry) will promise everything’s going to be OK. He’ll feel like Lucas can get his life back on track as soon as he wakes up. Julian will just have to tie up some loose ends and hope he doesn’t get busted for his role in the crash. The truth is bound to come out eventually, but that won’t stop Julian from thinking he’s got it all under control.

Meanwhile, Willow Tait (Katelyn MacMullen) will visit Michael so she can hang out with “Wiley Cooper-Jones” (Erik and Theo Olson). Willow seems to long for that kid more every day, so she should appreciate this bonding opportunity. It turns out Michael and Willow will bond just as much as Willow and “Wiley.”

During their visit, Michael will mention how he helped Sasha Gilmore (Sofia Mattsson) and Lucy Coe (Lynn Herring) reel in an investor. Willow will suggest that if she’d been at that meeting, she would’ve invested with Michael. Perhaps Willow will be trying to say that Michael’s always a safe bet. She feels she can trust Michael, so she won’t be surprised that the investor trusted him, too.

Other General Hospital spoilers say Elizabeth Baldwin (Rebecca Herbst) will face a difficult task. Franco Baldwin (Roger Howarth) will bring up Drew Cain (Billy Miller) and wonder what’s going on with him. He’ll naturally want to catch up with his pal, but Liz will admit that’s not possible. As you’d expect, Franco will be heartbroken to learn Drew was presumed dead after his plane went down.

Over with Hamilton Finn (Michael Easton), he’ll talk to Anna Devane (Finola Hughes) about Peter August (Wes Ramsey). GH viewers know Jason Morgan (Steve Burton) recently stirred up some doubts for Anna. She doesn’t want to believe Peter’s still shady, but her spidey senses are tingling now that Jason has brought it up.

Finn may wonder if Anna’s linked Peter to the crimes Jason’s accusing him of. He may think Anna’s getting ahead of herself and fretting for no reason. However, Anna will seem to have accepted Peter’s guilt. She’ll note that just because she hasn’t found a connection doesn’t mean it isn’t there.

At GH, Maxie Jones (Kirsten Storms) will surprise Peter with her festive attire – including an elf headband. She’ll insist she’s Santa’s secret helper, so it looks like Maxie will be pitching in on something for the hospitalized kids. Peter may let his guard down and enjoy some holiday fun now that his Franco fears are gone.

Nevertheless, Peter’s doomsday is indeed looming! When he least expects it, Peter’s downfall could strike hard. We’ll give you updates as other GH news comes in. Stay tuned to the ABC soap and don’t forget to check CDL often for the latest General Hospital spoilers, updates and news.