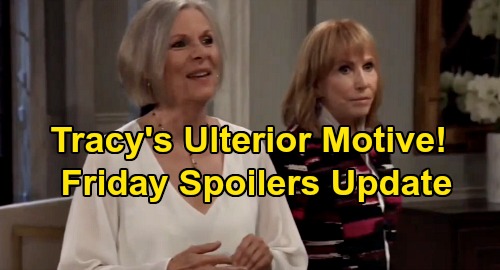 Carly obviously isn’t going to be thrilled, but this is what Mike Corbin (Max Gail) wants. Besides, it’d be cruel to just kick Gladys out and force her to spend the holiday alone. They might as well let Gladys have a bit of fun with them this year.

Meanwhile, Jason Morgan (Steve Burton) will want to make things fun for Danny Morgan (Porter Fasullo) and Scout Cain (Emme Ramacieri), too. He knows this Christmas is going to be difficult without Sam McCall (Kelly Monaco), but he’ll want them to do all the usual stuff – like visiting Santa Claus. Anything that’s normal will surely help Danny and Scout get through the holidays.

Jason will tell Alexis Davis (Nancy Lee Grahn) that everything he’s doing is for the kids. They’re his priority right now, so Alexis should be glad they’ve got Jason to rely on. Later, Danny will push Santa to give him a special present. He’ll likely hope the big guy can bring Sam back to her family, but that’s out of Santa’s hands.

Thankfully, Sam’s luck will indeed turn around once 2020 kicks off. She’ll just have to put up with Nelle Benson’s (Chloe Lanier) antics a little while longer. At Pentonville, Nelle will return to her cell and promptly drive Sam up the wall. Since Sam will be in no mood for this, she’ll slam a chair down and urge Nelle to zip it. Sam will make it clear that if Nelle doesn’t shut her mouth, she intends to shut it for her!

Over with Dev Corbin (Ashton Arbab), he’ll assure Cameron Webber (William Lipton) that he has everything he needs in Port Charles. Dev may shut down the idea that he’s homesick or missing out on anything. He appreciates Sonny taking him in as well as the friendship he’s found with Cam, Josslyn Jacks (Eden McCoy) and Trina Robinson (Sydney Mikayla).

Speaking of Trina, she’ll grill Josslyn about her holiday plans. Trina will want to know if Joss intends to grant Dev’s Christmas wish, but what will that wish be? If he makes some reference to kissing under the mistletoe or another holiday tradition, Trina may think Josslyn should help him out with that.

It seems Joss will be confused about what she’s looking for here. Does she want Dev as a pal or a boyfriend? That’s something Josslyn will have to decide – and a kiss in the new year just might help her make the call! For now, GH fans can probably expect some awkwardness for Dev and Josslyn.

Other General Hospital spoilers say Tracy Quartermaine’s (Jane Elliot) homecoming will leave Ned Quartermaine (Wally Kurth) floored. She’ll call Ned “sweetheart” as she greets him and explains that she’s returned to spend Christmas with the Quartermaine clan. Ned will push for the real reason Tracy came back, but that’s something she’ll keep under wraps for the time being!