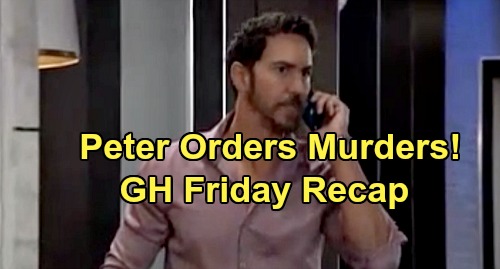 General Hospital (GH) spoilers recap for Friday, December 6, reveal that Peter August (Wes Ramsey) was on the phone with a henchman, ordering him to stop Franco Baldwin’s (Roger Howarth) memory reversal procedure by doing whatever it takes. Later, Peter was at The Metro Court and had another, more tense phone conversation with his henchman, telling him to kill Andre Maddox (Anthony Washington) and kill Franco if need be.

Anna Devane (Finola Hughes) barely missed hearing Peter’s words and wondered what’s got him so upset. This came after Anna had spoken with Robert Scorpio (Tristan Rogers) who warned Anna once again about being in denial over Peter. Anna warned Robert not to push her where Peter is concerned.

Meanwhile, Jason Morgan (Steve Burton) spoke with Sonny Corinthos (Maurice Benard) and revealed that Sam McCall’s (Kelly Monaco) parole hearing is coming up. Jason said that he wouldn’t be there for the hearing, as he didn’t want to negatively affect the outcome, but that he was going to take action. Later, he spoke with Ned Quartermaine (Wally Kurth) and asked him if he knew any of the parole board members. Ned did, and said that they were all fair and decent guys, but that there were no guarantees.

Ned then suggested that Jason go outside and help Franco, who was doing his part to help finish the tree house that Oscar Nero Quartermaine (Garren Stitt) wanted Drew Cain (Billy Miller) and Jason to work on together. Franco, who was preparing to have the memory procedure done a bit later, thanked Jason for standing up for him in court, and the two men worked on the tree house. Later, Monica Quartermaine (Leslie Charleson) and Jason examined the finished product and embraced.

Next, Willow Tait (Katelyn MacMullen) and Harrison Chase (Josh Swickard) had a heart-to-heart about what’s been bothering Willow lately. She told him about the pregnancy scare, and they shared their respective thoughts about it. Turns out, they were on the same page – they each felt relief yet disappointment. Ultimately, they talked it through and decided that they were ok with life together just as it is right now, but that they’d like to have kids together when they’re a little more settled in their lives.

At the Quartermaine mansion, Brook Lynn Ashton (Amanda Setton) talked with Monica after figuring out that Monica is the one who “stole” the Thanksgiving dinner. Monica explained that she donated the food because she wanted “Drew” to experience a true Quartermaine Thanksgiving, which Brook Lynn thought was outrageous. Olivia Quartermaine (Lisa LoCicero) then arrived, saying that Epiphany Johnson (Sonya Eddy) had called thanking her for donating the food to the hospital. Olivia blamed Monica.

But Brook Lynn lied and told Olivia that she was the one who donated the food, not Monica. After Olivia left, Monica dryly told Brook Lynn that it was noble of her to take the blame, and that now it would probably cost her something. Monica stated that Brook Lynn is just like her grandmother Tracy Quartermaine (Jane Elliot), and that she’s a Quartermaine through and through…which is exactly why Monica doesn’t trust her.

Later, Ned caught Brook Lynn on the phone yelling at someone to stop harassing her. He pressed her for details, but at just that time Olivia had news about Lucas Jones’ (Ryan Carnes) accident, which sent Brook Lynn running out of the room. Ned then relayed to Olivia that he had called Lois Cerullo (Rena Sofer) and it turns out that Brook Lynn is hiding something big.

Finally, Carly Corinthos (Laura Wright) greeted Griffin Munro (Matt Cohen) at GH, whom she had called to review Lucas’ case. Griffin, who has been working with an organization providing medical care to rural areas, examined all of Lucas’ medical records and agreed with the GH doctors’ assessment – it’s now a game of wait-and-see.

Griffin then asked Sonny about how his father was doing, and Sonny updated him on Mike Corbin’s (Max Gail) deteriorating condition. Sonny wondered if Griffin could look at his labs, and after he did he reported back that Mike has suffered significant deterioration and that they are approaching the end. Griffin did mention a study that he might be able to get Mike in that could bide him some time, and Sonny stated that he wanted him in the study, whatever the cost.