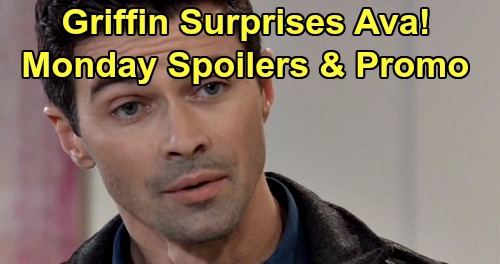 General Hospital (GH) spoilers for Monday, December 9, tease that Peter August (Wes Ramsey) will pile on the deception. GH fans know Peter’s eager to stop “Drew Cain” aka Franco Baldwin (Roger Howarth) from having this procedure. He told his minion to eliminate Franco, Andre Maddox (Anthony Montgomery) or both for all he cares. Peter wants to make sure “Drew” never remembers anything that could sink him.

However, Anna Devane (Finola Hughes) walked up just in time to see that Peter was having a tense conversation. Peter should be relieved when he realizes Anna didn’t hear his orders, but he’ll still seem a bit rattled to her. Anna will decide to call Peter out on how off he seems. She’ll suggest she’s beginning to see that Peter’s got something on his mind, so he’ll have to tell more lies.

Peter will come up with a bogus story for why he’s troubled and hope it convinces Anna to back off. Meanwhile, Ava Jerome (Maura West) will be out of Shadybrook and back at the gallery. Ava was pretty drugged up when Nina Reeves (Cynthia Watros) explained her theory that Nikolas Cassadine (Marcus Coloma) is alive and has been tormenting Ava to get what he wants. Once the drugs were out of Ava’s system and she could think with a clear head, she undoubtedly agreed.

Nina suggested they should form an “unholy alliance,” so perhaps they’ve continued plotting together offscreen. Whatever the case, General Hospital spoilers reveal Dr. Griffin Munro (Matt Cohen) will pay Ava a visit at the gallery. Monday’s GH preview video shows Ava looking shocked, so she may be taken aback by Griffin’s arrival.

Griffin popped up for a bit on Friday after being summoned by Carly Corinthos (Laura Wright). He’ll soon fill Ava in on why he’s in town, which is to give his expert opinion on Lucas Jones’ (Ryan Carnes) condition. Ava should worry about Julian Jerome (William deVry) and how he’s coping, but she doesn’t know the half of it. Julian’s the reason Lucas is in a medically induced coma right now, so we’ll see how long he can keep that a secret.

As for Griffin and Ava, they’ll take a moment to catch up. It seems likely they’ll discuss Kiki Jerome’s (Hayley Erin) death and how they’ve dealt with it. Griffin appears to have moved on and found his way, so that’s great news. He may have heard about Ava’s Shadybrook stint, but she may assure him she’s found her new path, too. Ava should leave out the part out about it being a vengeful one!

Trina Robinson (Sydney Mikayla) will also share some scenes with Ava at the gallery, so let’s hope GH keeps developing their friendship. It’s nice for Ava to have someone who cares about her and doesn’t judge her for her mistakes. Ava hasn’t done anything worse than the rest of Port Charles, so she deserves a sweet gal like Trina to confide in.

Other General Hospital spoilers say Valentin Cassadine (James Patrick Stuart) will compare notes with Nina at the Metro Court. He’ll admit his gallery break-in didn’t go as well as he planned, so he’ll hope she had better luck with Ava. When Valentin asks if Ava gave Nina anything useful, she’ll seem somewhat torn. That’s not surprising since Nina’s already been struggling with whether to take her revenge or just enjoy her family with Valentin and Charlotte Cassadine (Scarlett Fernandez).

However, it doesn’t look like Nina will spill anything about the Cassadine ring she found or her theory about Nik’s survival. For now, Nina should keep her mouth shut and focus on destroying the Cassadine men. Valentin will start to get suspicious though, so Nina had better be careful.

Nina will also contemplate a new partnership on Monday. She may consider telling Jasper “Jax” Jacks (Ingo Rademacher) what she’s figured out. Nina might think Jax can help her take down Valentin and double-cross Nikolas as well. Jax would probably be open to that since Nik makes a new mess daily!

On Monday, Jax will snap that Nikolas should go knock on Valentin’s door. He’ll be fed up with Nik for causing so much drama, so he’d be more than happy to feed him to the wolves. At GH, Elizabeth Baldwin (Rebecca Herbst) will have a heart-to-heart with “Drew” before his procedure. She may admit she’s terrified about the outcome not turning out how she wants, but she’s willing to take the risk as long as “Drew” is. Liz will admit she wants her Franco back.

General Hospital spoilers say Peter’s murder plot will ultimately be thwarted – perhaps by Laura Webber’s (Genie Francis) sabotage, which is coming up later in the week. “Drew’s” procedure will move forward, so Liz will indeed be reunited with Franco soon. We’ll give you updates as other GH details emerge. Stick with the ABC soap and don’t forget to check CDL often for the latest General Hospital spoilers, updates and news.