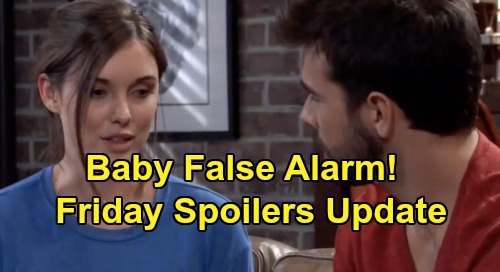 General Hospital (GH) spoilers update for Friday, December 6, teases that Jason Morgan (Steve Burton) will make a promise to Sonny Corinthos (Maurice Benard). He’ll insist he’s going to take action so that things work out the way he wants. Jason will likely be talking about Sam McCall’s (Kelly Monaco) prison situation. He can’t sit back and let Sam suffer behind bars – especially when the kids are suffering, too.

Of course, Jason himself is suffering without his true love by his side. He’ll be desperate to free Sam and bring her back home where she belongs. In the meantime, Jason will distract himself with another project. He’ll catch Ned Quartermaine (Wally Kurth) off guard, and he won’t be the only one. “Drew Cain” aka Franco Baldwin (Roger Howarth) will also visit Ned with the goal of giving a final gift to the real Drew Cain (Billy Miller).

Oscar Nero Quartermaine (Garren Stitt) requested that Drew and Jason work together on a treehouse for future generations. It doesn’t look like Jason and “Drew” will actually team up for the task, but they’ll both be interested in doing their part. Perhaps “Drew” will complete part of the treehouse and leave Jason to finish the rest. Whatever the case, “Drew” will be happy to know he could carry out Oscar’s wishes in Drew’s absence.

Other General Hospital spoilers say Elizabeth Baldwin (Rebecca Herbst) will get a heartfelt apology from Peter August (Wes Ramsey). He’ll feel like Liz wouldn’t be in this position if he’s made different choices. However, Liz may not blame Peter for his past. Shiloh Archer’s (Coby Ryan McLaughlin) the one who took Cameron Webber (William deVry) and allowed Franco to trade places with teen.

Even so, Peter will feel guilty about all his sinister secrets. He’s been trying to cover up just how deep he was in this memory-mapping mayhem, but he’s made a web of deceit in the process. Next, Harrison Chase (Josh Swickard) will finally find out what Willow Tait (Katelyn MacMullen) seemed worried about earlier. Chase should be taken aback to learn about the pregnancy false alarm.

Willow will suggest that this whole ordeal got her thinking about their family’s future. GH fans know they’ve talked about kids before, but they haven’t had in-depth discussions. Willow will think it’s time to have one of those and set the record straight about what they both expect when it comes to kids.

Across town, Brook Lynn Ashton (Amanda Setton) will seem surprised by Olivia Quartermaine’s (Lisa LoCicero) comment. Olivia tried being nice, but Brook Lynn was more than willing to walk all over her. Monica Quartermaine (Leslie Charleson) seems to think Olivia needs to be firmer with Brook Lynn, and it looks like she just might on Friday.

General Hospital spoilers say Olivia will tell Brook Lynn she doesn’t even know the half of it. She’ll seem a bit snarky when she says it, so Olivia may get a little of her fire back. Brook Lynn deserves to get as good as she gives! Over with Maxie Jones (Kirsten Storms), she’ll get updates on Brook Lynn’s return to Port Charles when Lulu Spencer (Emme Rylan) drops by. Lulu will rant about Brook Lynn creating Thanksgiving drama and wish she’d go back to where she came from.

Maxie will undoubtedly give Lulu a pep talk and try to be the very best bestie she can be! We’ll keep you posted as other GH news comes in. Stay tuned to the ABC soap and don’t forget to check CDL often for the latest General Hospital spoilers, updates and news.