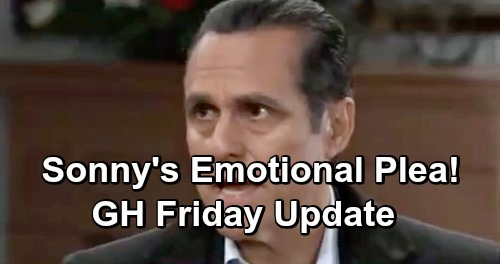 General Hospital (GH) spoilers for Friday, January 4, tease that Stella (Vernee Watson) will have a chat with Mike Corbin (Max Gail). She’ll want to prepare him for the possibility of change at Turning Woods. Stella will warn that things might be a bit different when they get over there.

Mike’s hoping that Marcus Godfrey (Nigel Gibbs) will reconsider moving Yvonne Godfrey (Janet Hubert) out of the facility. He’s even offered to stay away from her, but that plan obviously won’t work. Mike would just forget Yvonne’s married again and they’d be right back where they started.

Marcus will either have to move Yvonne out or accept her mild side romance. Sonny Corinthos (Maurice Benard) will beg for the latter as he makes his pitch on Friday. He’ll deliver an emotional plea for his dad, who cares for Yvonne and brings joy to her life. Yvonne brings joy to Mike as well, which means a lot since they’re facing so many struggles.

While Marcus reaches a decision, Ryan Chamberlain (Jon Lindstrom) will leave Laura Collins (Genie Francis) on edge. As Ryan continues to pose as Dr. Kevin Collins (Jon Lindstrom), he’ll pop up at what appears to be a campaign event. Lulu Falconeri (Emme Rylan) will put together a gathering and it looks like many of Laura’s supporters will be there.

When Ryan saunters in, he’ll make a comment about sharing his intentions. GH spoilers say Ryan will back Laura up as she tries to become Port Charles’ new mayor. He’ll assure everyone that Laura is the ideal person for this position, so she should be grateful.

Perhaps Ryan’s latest stunt will be enough to get Laura off his back. She’s been concerned about “Kevin” possibly having another psychotic break, so he needs to show a little of Kevin’s sweet side here and there. It’s the only way to preserve his scheme and keep wreaking havoc.

Over with Jordan Ashford (Briana Nicole Henry), she’ll call Curtis Ashford (Donnell Turner) for some murder investigation help. Jordan will hope they can make some sort of discovery before the killer strikes again. The people of Port Charles are pretty terrified, so Harrison Chase (Josh Swickard) will teach a self-defense course on Friday. He’ll hope they’ll be ready for anything by the time he’s through.

Willow Tait (Katelyn MacMullen) will get some useful advice and engage in some mutual flirting. Chase is falling hard, so he’ll be happy that Willow’s showing some interest. Elizabeth Webber (Rebecca Herbst) will try to catch Willow before or after class. She’ll think they need to set up another parent-teacher conference to discuss Aiden Webber’s (Jason David) bullying battle.

Now that Charlotte Cassadine (Scarlett Fernandez) has apologized, it’s given Liz hope for the future. Unfortunately, Charlotte warned that the other kids think Aiden is weird, too. It certainly doesn’t sound like Aiden’s school issues are over.

General Hospital spoilers say Maxie West (Kirsten Storms) and Nina Reeves (Michelle Stafford) will also pick up some self-defense tips. As long is Ryan is out there leaving bodies everywhere, fear is going to grow. It’s good that PC residents are trying to prep for a potential attack, but Ryan’s victims are typically no match for him!